Outside the Writer's Room: Writing in the Kitchen on a Snowy Day in Vermont 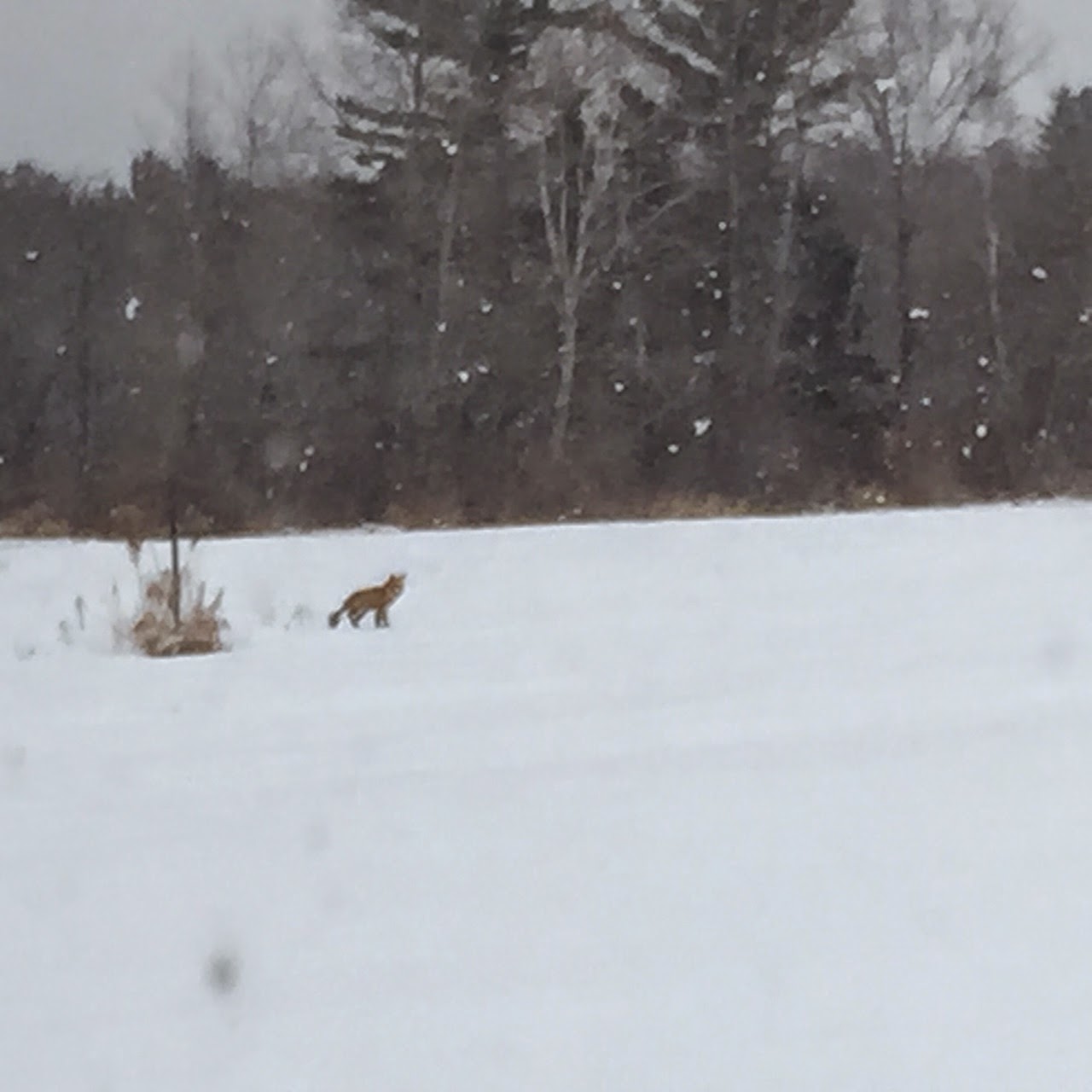 I know writers are supposed to barricade themselves in private soundproof rooms, where they can keep the outside world away while they create new worlds on paper. So, why do I find myself writing in the kitchen so often? Maybe it's the closeness of the tea kettle. Maybe it's the light. Or maybe the expectations loosen up and it's just more fun ...

At any rate, I was sitting at the kitchen counter scribbling a first draft of a poem (shown at the bottom), which kept getting changed each time I looked at it (multiple drafts; and can we still call it "scribbling" on a computer? well, why not?), and out of the corner of my eye caught something in motion outside the kitchen window. In one coordinated leap, I grabbed the binoculars and made it to the window, and then ran to the next one, pulling out my cell phone and adjusting its bold little camera to "zoom." And here's the result: a fox that wove back and forth along the field, then came right down to the edge of the yard where the gardens begin, where a mouse must have been traveling under the snow. I watched the fox pounce, dig down, and snap up its snack and chew (with mouth open, eeyew). 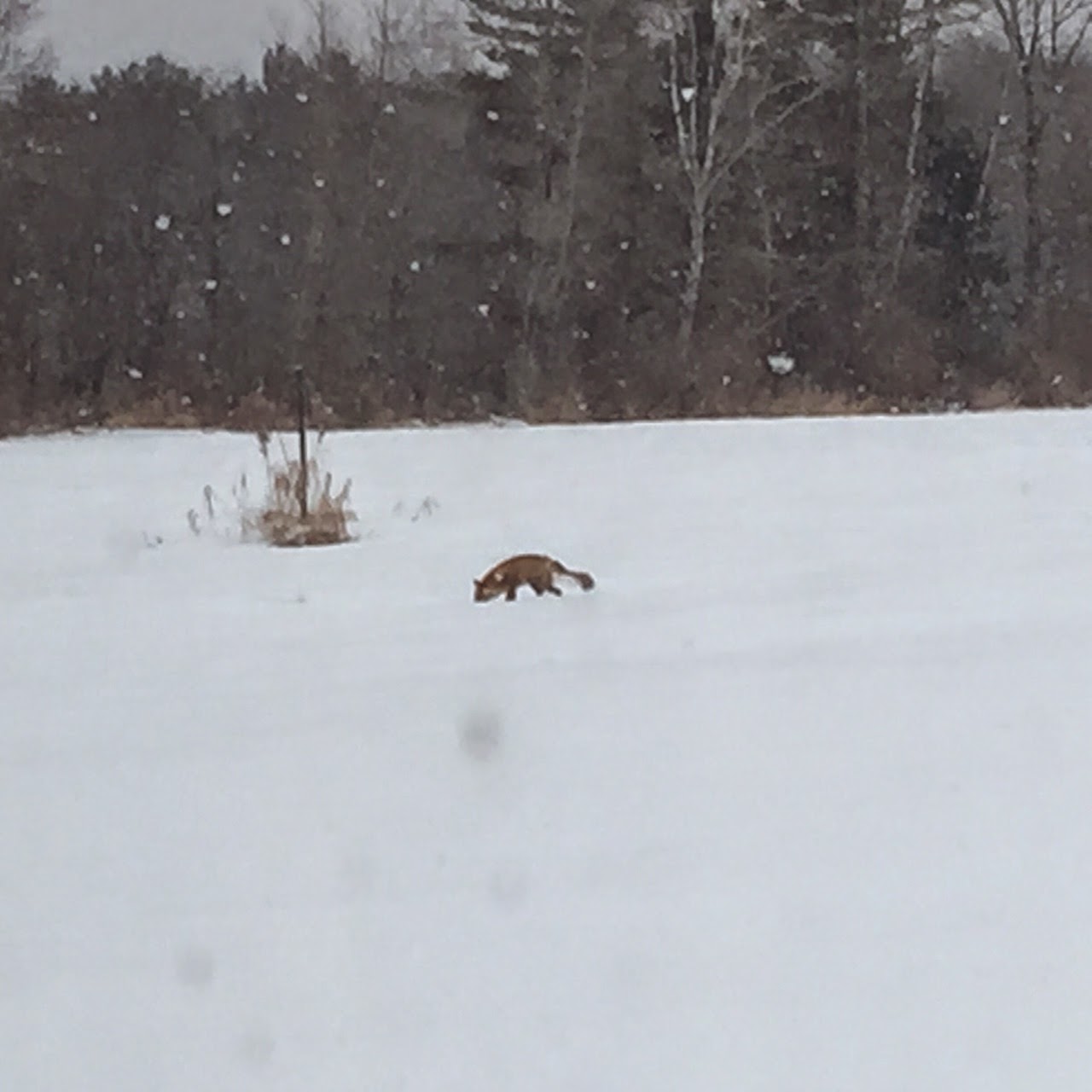 It paused to look toward me -- movement at the window drew its attention, I'm sure -- before heading back toward the woods at the top of the field. 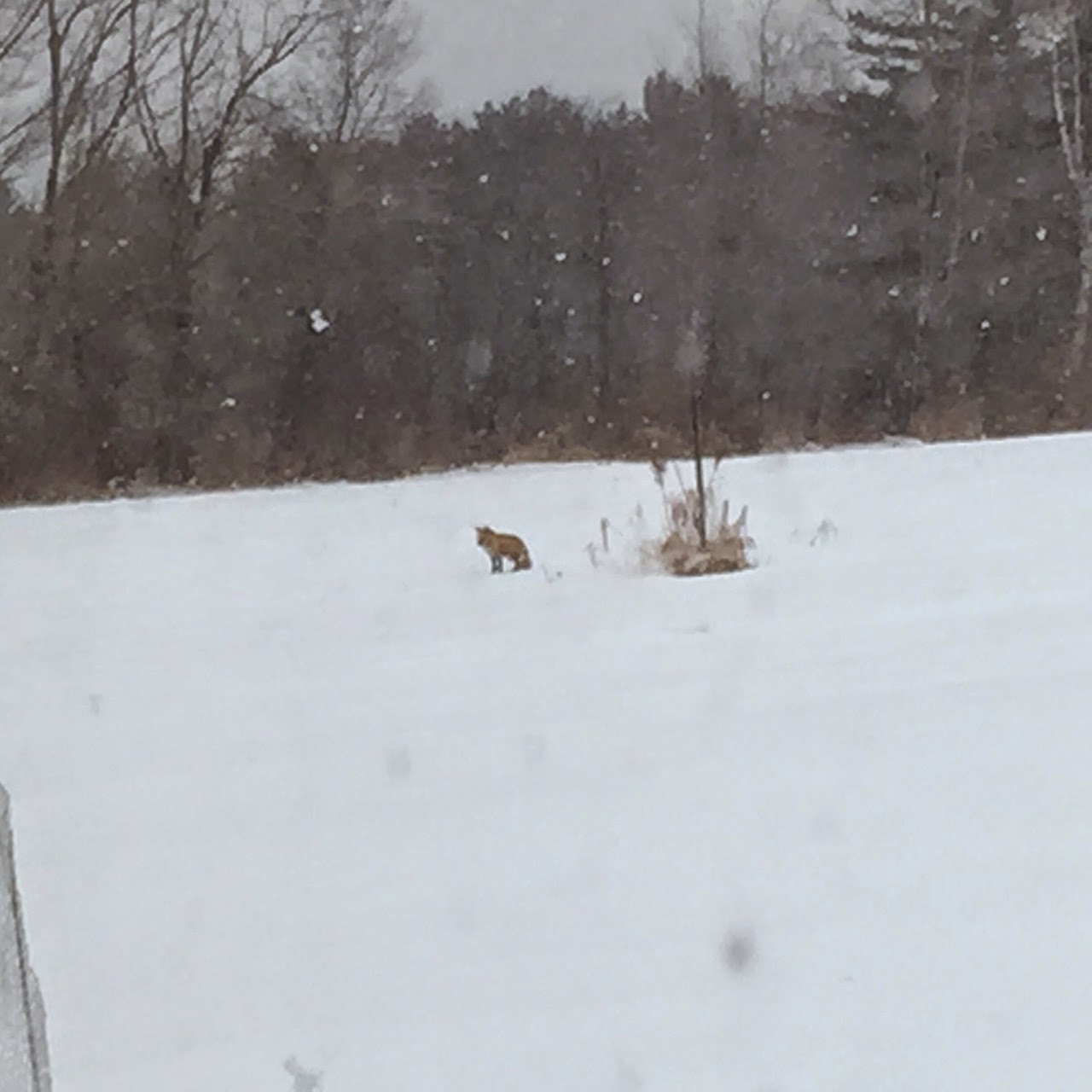 And THAT is why writing by a kitchen window is a Very Good Idea. Forget the desk, for today.

I was seven, my brother five, my cute little sister
just three years old. We played tag
with lots of other kids in the neighborhood.
The Slaines were Catholic, lived across the street,
and their girl my age – was it Nancy? –
had a “wedding dress” when she turned seven
and made her First Communion. How envious
I was of her cuteness, and her day of lacy
beauty. The little girl who lived on our other side,
Eileen, sat on the wooden edge of our sandbox
and edged her words with scorn:
“Nancy’s Catholic,” she emphasized in a new way,
a pout of her rosebud lips indicating
a form of disgust. Even then, I knew it must be
something she’d learned from her parents.
Then she announced, with pride,
“I’m Protestant!” – sure, we had heard that label in our house.
My brother grinned, bobbed his crewcut head, agreed.
I had curly hair (too curly said my mother),
which bounced even with my neutral nod.
Then my little sister, rising to the call,
stood up, saluted, and said, “I’m American!”

Things Change: In Small Towns in Vermont, Often via Disaster

When my husband Dave and I began investigating the people and events indicated by an 1880 postcard mailed from one small town near us, to another, I opened up a resource that I'd purchased a few years ago, knowing it would be significant -- but at the time, I'd finished one project related to it, and didn't need the details. It was a doctoral dissertation by Northeast Kingdom historian Allan Yale, and gave details of operations at E. and T. Fairbanks, or, as it was locally called more often, the Mill -- or today, "Fairbanks Scale."

Thanks to Scott Wheeler, editor/publisher of Vermont's Northland Journal, I pulled together all the research around the postcard into a story of discovery, with some suprises in it. And that will be an article in the February issue of Scott's magazine.

I gave to Scott images of the front and back of the postcard. I really wanted to also send along images of a building that has an important role in the story, the company store that the Fairbanks factory operated. But I got frustrated, trying to find a good image. This shows the structure at that location, more or less "today," in brick with the name FAIRBANKS inset up high on the building. But I wasn't sure it fit with the 1880s, and didn't know how to find the right version of the building.


Well, you know how "collecting" can be -- my puzzle inspired Dave to keep searching in his own "ephemera" (the fancy name for items that have a very short lifetime, especially old paper). He found a lovely old stapled booklet of photos of the town, and called me to his work space in triumph: there it was, the Fairbanks company store, probably photographed around 1880 to 1900.

But what a difference from today's lineup of structures! In fact, it's clearly made of wood, not brick, and even the "St. Johnsbury House" next door is not the same building we see today.

Sadly, we know the answer is likely to have been: Fire.

Next task -- find the record of the local disaster that wiped out those earlier structures, and put a date to the change. Even in the past 15 years, St. Johnsbury has seen more than its share of fires in the wooden or wood-framed downtown structures. Someday, the idea of towns that are forced to change via fire, or even via flood (more on that at another time), will seem quaint to us. But today it's still very real. We wish our extended neighborhood a safe winter, and hope this will be a year when fire does not escape its proper place.
Posted by Beth Kanell at 10:46 AM No comments: