I'm about halfway through writing KINDRED HEARTS, and every surface around me is covered with research. Not very tidy, but how exhilarating!

At this stage, also, almost everything around me spurs fresh inquiry ...

Neighbors up the road just took their daughters to visit Salem, Massachusetts, and that sent me to reviewing the Salem Witch Trials and the notorious role of Cotton Mather (1663-1728) in them.

In turn, that sent me to Wikipedia for a quick review -- I often find Wikipedia to be a great jumping-off site for research, loaded with footnotes. I don't take the view of the Wiki writer as necessarily "valid" but I find a lot to explore from, after looking at this, from https://en.wikipedia.org/wiki/Cotton_Mather—and the last paragraph made me very sad:

Mather was born in Boston, Massachusetts Bay Colony, the son of Maria (née Cotton) and Increase Mather, and grandson of both John Cotton and Richard Mather, all also prominent Puritan ministers. Mather was named after his maternal grandfather John Cotton. He attended Boston Latin School, where his name was posthumously added to its Hall of Fame, and graduated from Harvard in 1678 at age 15. After completing his post-graduate work, he joined his father as assistant pastor of Boston's original North Church (not to be confused with the Anglican/Episcopal Old North Church of Paul Revere fame). In 1685, Mather assumed full responsibilities as pastor of the church.[1]: 8

Mather wrote more than 450 books and pamphlets, and his ubiquitous literary works made him one of the most influential religious leaders in America. He set the moral tone in the colonies and sounded the call for second- and third-generation Puritans, whose parents had left England for the New England colonies, to return to the theological roots of Puritanism. The most important of these was Magnalia Christi Americana (1702) which comprises seven distinct books, many of which depict biographical and historical narratives.[3]

Mather influenced early American science. In 1716, he conducted one of the first recorded experiments with plant hybridization based on his observations of corn varieties. This observation was memorialized in a letter to his friend James Petiver:[4]

First: my Friend planted a Row of Indian corn that was Coloured Red and Blue; the rest of the Field being planted with corn of the yellow, which is the most usual color. To the Windward side, this Red and Blue Row, so infected Three or Four whole Rows, as to communicate the same Colour unto them; and part of ye Fifth and some of ye Sixth. But to the Leeward Side, no less than Seven or Eight Rows, had ye same Colour communicated unto them; and some small Impressions were made on those that were yet further off.[5]

In November 1713, Mather's wife, newborn twins, and two-year-old daughter all succumbed during a measles epidemic.[6] He was twice widowed, and only two of his 15 children survived him; he died on the day after his 65th birthday and was buried on Copp's Hill, near Old North Church.[1]: 40

Postcard Insights: Autumn in Vermont, via the Lens of Alois Mayer

This isn't a great day for me to make a road trip for foliage photos, but my late husband Dave's postcard collection can always fill in! Here, at the top, is a view of Jay Peak taken from a field of grazing cows in Newport (Vt.). Continuing the dairy theme, the middle card is an aerial view of Cabot, home of Cabot Creamery, surrounded by farms. The third (bottom) card shows Lake Memphremagog, looking from the north toward distant Willoughby Gap. The photos are probably from the 1980s, says Dave's note.

What intrigued me today is that all three cards feature photos by the same person: Alois Mayer. So of course I looked up the name, and found this in the Valley News from March 8, 2021:

BOMOSEEN, VT — Alois Mayer was born on March 23rd, 1938 and died on February 26th, 2021. He was raised in Maria Alm, Austria. Alois was the eighth of ten children of Sebastian and Katharina Mayer. As a young man, Alois was a ski instructor in Austria which led to his coming to America in 1963 at the age of 25 to work at Killington Mountain and eventually as the Ski School Director at Pico Peak for several years. Alois then focused his efforts into his considerable talent as a landscape photographer, selling his postcards and calendars across the State of Vermont for decades, through the business he founded Mayer Photo-Graphics, until his retirement.

Alois is survived by his two sons Jon and Kristian, his four grandchildren, his brothers Balthasar and Alexander, and his sister Susanne.

How remarkable! "Every picture tells a story" -- and this group of foliage photos led me to a very unexpected one. My sympathies to the family of this photographer, who has clearly made his mark in Vermont in at least two significant ways.

Posted by Beth Kanell at 9:57 AM No comments:

From the Earth Itself: Pottery Made in St. Johnsbury Center

Every time I pass a brick house in the Northeast Kingdom of Vermont, I'm reminded that these long-lasting house components came directly from the soil here. My understanding is that brickyards were once common in the region, especially along the streams and rivers, where clay beds could be found. 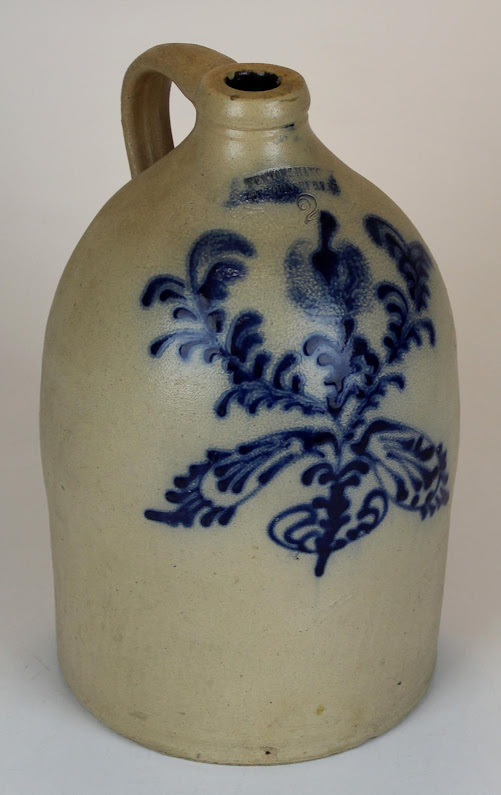 But it wasn't only bricks that came from such clay. Pottery, a classic of early American life, is formed from this specially elastic material, which can be shaped and then baked at high temperature in a kiln, to form waterproof containers. According to St. Johnsbury historian Edward Fairbanks, the products of the St. Johnsbury Stone Ware Pottery "were in constant demand until the introduction of tinware."

Studying the history of the Center Village, known today as St. Johnsbury Center, took me seeking the history of this pottery. "Early New England Potters and Their Wares" by Lura Woodside Watkins fills in the details that Fairbanks mentions in his history.

General (probably a militia title, perhaps from our Revolution) Richard Webber Fenton founded his stoneware manufactory about half a mile south of the village, on the west side of the river. His son Leander W. Fenton seems to have taken on the business and partnered with someone named Hancock; the "domestic ware" ("from jugs, jars, bottles and milk pans, at a dollar a dozen, to fancy flower pots at sixty cents each," wrote Fairbanks) were marked either "L. W. Fenton" or "Fenton & Hancock," along with the town's name. Power for the pottery, with its spinning potters' wheels, came from a brook spilling down the slope.

Watkins wrote that a great-granddaughter of Leander's, Mrs. W. W. Husband, lived in St. Johnsbury and had a list of the articles available in the late 1850s: 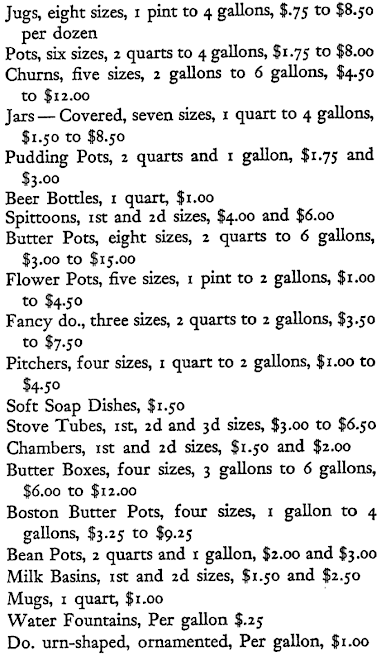 Both Fairbanks and Watkins mention the end of the pottery firm in November 1859, when a fire destroyed it. While working on my recent article on St. Johnsbury Center history for the October 2021 North Star Monthly, I found mention of the fire in the Caledonian, reprinted in the November 17, 1859, edition of the Green-Mountain Freeman:

I don't know of any items from this potterymaker locally, although Watkins enthuses about a distinctive one of the water coolers, with cobalt blue decorations that she guesses might have been done by either Eleazar Orcutt or Edward Alonzo Crafts, both known to have been employed in St. Johnsbury.

Jugs with the Fenton & Hancock mark come up at antique auctions fairly often, and I have borrowed an image from one of these to show above. Look closely and you can see part of the name of the pottery across the top of the blue decoration.

Do you know more about the pottery? Have a fragment or whole item in your own collection? Have connections to the Fentons or Mrs. Husband, or more detail for who Hancock was? Please do comment!