Investigating a Postcard of the Concord Coach 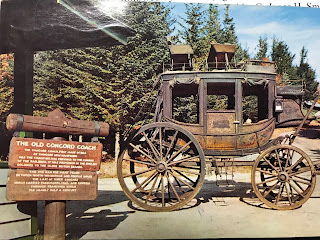 My husband Dave, who died in April, did enormous amounts of research for details I needed as I wrote my historical adventure novels set in North Upton (loosely based on North Danville), Vermont.

On September 1, 2019, I started writing the next book, tentatively titled O FIERCE AND KINDRED HEART. It will follow The Long Shadow (2018) and This Ardent Flame (accepted by the publisher, Five Star/Cengage; I am hoping for autumn 2020 publication). So this will be "Winds of Freedom" Book 3! And again it begins in North Upton, this time in 1854.

So of course, I went to Dave's stacks of postcards, and found right away this image of a Concord Coach: the kind of horse-drawn vehicle used to transport passengers and mail around New England and beyond. The card came from Franconia Notch, New Hampshire, mailed in 1961. 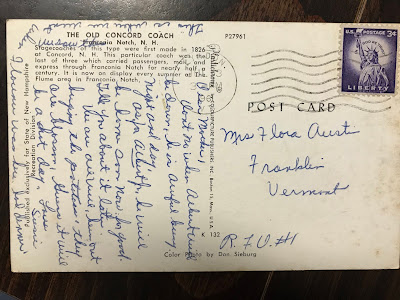 Notice the addressee? It's Flora Austin of Franklin, Vermont, and the sender is clearly her daughter or daughter-in-law, Susie. She starts by mentioning "Albert" and that she doesn't know when he'll be down, then says that Albert Jr. will soon be home for good.


Research, which Dave and I would have collaborated on after he'd identified the postcard publisher and probable photographer and photo year, becomes a chase for family details. And here's what I found:

What fascinated me among the details is, this card's presence in the Northeast Kingdom was no accident: Willard Austin died in Lyndon on 29 April 1972, and although the recorded birthplace for Albert Willard Austin is Franklin, he died in St. Johnsbury, Vermont.

Those details make me wonder whether that the Austin family connected to this postcard may also connect to Lyndon's noted Dr. Venila Lovina Shores, whose paternal grandmother was an Austen (spelled with -en, not -in); could that be? It's the kind of coincidence that often arises when working with Northeast Kingdom history!

Meanwhile, I am content to know that the Concord Coaches once drove just a few miles from where I sit writing today -- and to find that "DK" was ahead of me, leaving more for me to investigate in his collection.
Posted by Beth Kanell at 9:31 PM No comments: