If Everyone in America (and Specifically, Vermont) CAN Vote Now, Why Don't They?


In the year 2020, we'll mark 100 years since American women gained the right to vote. For some of us, exercising our vote came as a normal mark of adulthood -- and in Vermont, when we sign up to vote also pledge to do it responsibly, using the Freeman's Oath, which in 2002 became the Voter's Oath and gained inclusive language:


§ 42. Voter's qualifications and oaths
Every person of the full age of eighteen years who is a citizen of the United States, having resided in this State for the period established by the General Assembly and who is of a quiet and peaceable behavior, and will take the following oath or affirmation, shall be entitled to all the privileges of a voter of this state:
You solemnly swear (or affirm) that whenever you give your vote or suffrage, touching any matter that concerns the State of Vermont, you will do it so as in your conscience you shall judge will most conduce to the best good of the same, as established by the Constitution, without fear or favor of any person.


Is voting any different for women than for men? Percentages of voting women suggest there are real effects of gender ... hard to sort out. Even more than gender today, though, access to voting can be blocked or slowed by disability (I have a sibling whose lack of mobility makes it REALLY hard to get registered), low income (who'll watch the kids? what about loss of pay for that hour off to sign up, when every hour of income matters?), and details like skin color, accented English (even if the person is very educated), and obvious personal choices and beliefs can all interfere.

Today's Montpelier meeting of about 18 women (some in person, some phoning in) to collaborate on preparation for marking 2020 included conversation about most of those factors. It also admitted past detours, with resolve for better present and future actions. The interactions, energy, and respect in the conversation promised an effective mission, strong goals, and exciting events and processes ahead. I learned a lot about how active the League of Women Voters is in Vermont, too, with strong effects that can create change.

Consider this set of mission plus goals from 25 years earlier, in Vermont, to mark 75 years of women voting -- where I was surprised to see the economic focus: 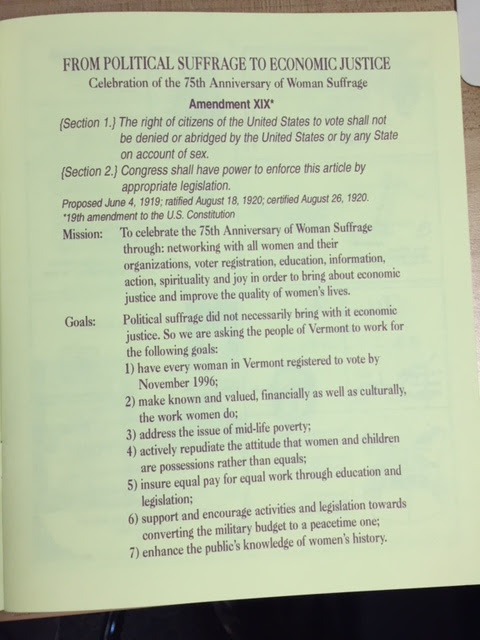 I also learned about a Vermont organization called Change the Story -- came home wearing a pin provided via the Vermont Commission on Women, and checked out the website (http://changethestoryvt.org), discovering the group focuses on the economic status of women in Vermont. Makes sense to me ... 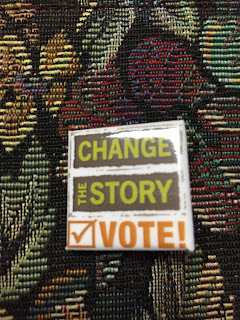 I can hardly wait to see what comes next!
Posted by Beth Kanell at 4:02 PM No comments: