A Picture Tells a Story With Heart 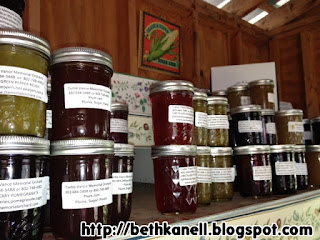 I love this image, which began with a photo I took a week ago inside the farm shop at the Langmaid farm in North Danville. You can see the rows of jellies and jams (I'll re-show, below, my other photo from that day, which shows the baked goods -- the donuts were flying out of there at 3 for a dollar).

And here are some parts of the story that come with the photo:

* North Danville, Vermont, is the location that inspired -- and really is the home of -- my 2011 mystery adventure THE SECRET ROOM. This little farm store is roughly where the imagined village store is, in the novel. And each time I'm in North Danville, I'm haunted by Shawna and Thea (from the novel) moving back and forth to each other's homes and discovering the secrets there.

* The jelly-jar labels include "Curtis Vance Memorial Orchard" as their first line. Curtis Vance lived in North Danville; he was a cousin of teacher and librarian Mary Prior, who insisted that I place a book in this place! The community that gathered around Curtis Vance during his long illness (familial ALS) was wide, deep, and loving. I enjoy seeing his name on the jars, even though I can't ever see him in person again.

* Autumn is my favorite season (is it yours, too?) -- my birthday is at the start of September, and I always have that "first day of school" excitement in my chest too. Most of all, I love the crispness, the scent of the air, the colors of the leaves, and the activities of harvest. "Putting food up" as jams, jellies, pickles, applesauce -- what could be a better statement of faith in the future? 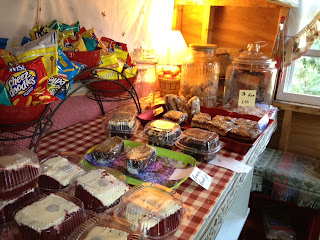 * Last but not least, I just took a class (yes, you can take classes from home, when you're a writer who loves to be at her desk) on Pinterest (ultimate in "new" -- contrast with the eons-old skills of preserving foods!) and figured out how to add this blogsite as an insert on my photo. It's still a bit basic; I'll be better next week. But I'm happy to be learning, and joyful to open the window and smell Autumn, and -- full circle -- thinking quietly again about Curtis Vance and Mary Prior. Life passes, and we are fortunate to preserve some of the "good food" to sample again later.
Posted by Beth Kanell at 1:29 PM No comments:

History Behind the Story: From Vicki Delany, Author of MORE THAN SORROW (2012)