Stories That Lead to Other Stories -- True Ones! 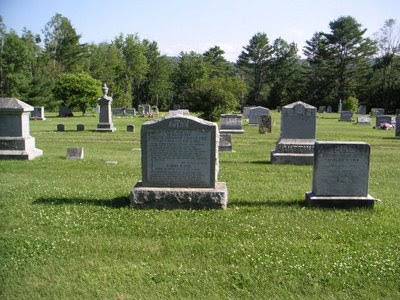 Maybe fifteen years ago, I discovered a memoir -- almost, a set of tall tales -- of logging on the Connecticut River during the early 1900s. It's called SPIKED BOOTS and was written by Robert Pike. I paid a lot of attention to it, because I was helping plan the land use for the vast former logging lands in northeastern Vermont, and reading the book helped me to connect with the loggers who had been there, as well as the ones who worked in the forest as we headed into the twenty-first century. The stories in SPIKED BOOTS and Robert Pike's other book, TALL TREES, TOUGH MEN, are all about men who spend their winters cutting down timber, and their spring seasons riding with the logs down the surging waters of the thawed-out rivers.

It took some digging, but I found out eventually that there were also women working in the woods that way, from the middle 1800s onward. Their stories didn't get written down very often -- partly because there weren't very many of them, but mostly, I think, because people didn't think it was ladylike for women to do this kind of work! And of course, women who ran logging crews needed to have strong personalities and not be afraid of the physical labor, the rough language, and the day-to-day hardships of managing their crews. In the rare photos I've spotted, they wore skirts, though, so I think it was important to them to be seen as ladylike in that way!

Of course, I couldn't resist telling people about the true-life stories I'd discovered, and soon some local teachers found out that I could "storytell" the history of logging on the Connecticut River. The story begins with the English colonists arriving in New England, being warned not to cut the tallest, straightest pine trees for their own use -- because they were reserved for the ships of the English Royal Navy. In fact, men working for the king took branding irons into the forest to mark those trees as "the King's Pines." Wow! The story ends at the moment Molly Ballou's story begins in THE DARKNESS UNDER THE WATER: with the construction of massive dams across the river, to generate electrical power -- most importantly, the dam being built in 1930, Comerford Dam. For the first time on this big river, a dam was being built that had no "sluice gate" to let logs pass through. There would be no more wild rides on huge tree trunks whipping past the rocks and around the bends. River logging ended.

A few weeks ago, I explored a cemetery in Waterford where I'd never been before. There in front of me was a huge marker for author Robert Pike -- or Bob, as he was known around here. It's just a few miles from where Molly Ballou and her friend Katy would have watched the log drive in the spring of 1930.

This story really matters, to me, and to the Connecticut River loggers. And for Bob Pike and the many people who still read copies of SPIKED BOOTS, it's been a great part of this area of Vermont.
Posted by Beth Kanell at 11:31 AM No comments:

The Village That Vanished 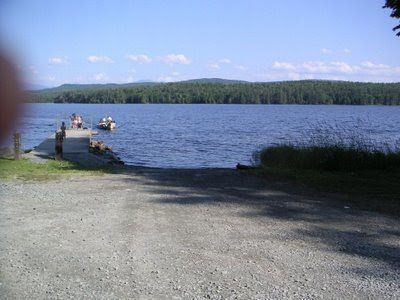 I love mysteries -- in books, and in real life. One of the moments that would grow into The Darkness Under the Water happened when I first asked a local historian, "I've driven through Lower Waterford, Vermont. Where is Upper Waterford?"

The historian answered, "Under the water."

Sure enough, two big hydroelectric dams built on the Connecticut River -- one in 1928-1930, the other in the 1950s -- created enormous lakes that swallowed up homes and land in the town of Waterford. The village of Upper Waterford completely vanished behind what is now Moore Dam. Yesterday I went to take photos of where it had been. The first photo, above, is where the road from Lower Waterford used to continue to Upper Waterford. And in the second one, below, can you see the sandy-looking patch across the lake? That's where the road from Upper Waterford used to cross the river and continue into New Hampshire!

The mystery got more intense when I started to look for old-time picture postcards of the vanished village. More on that, later. 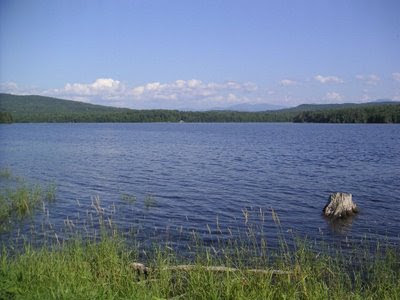