The Portrait That Lied: How a Novel Begins 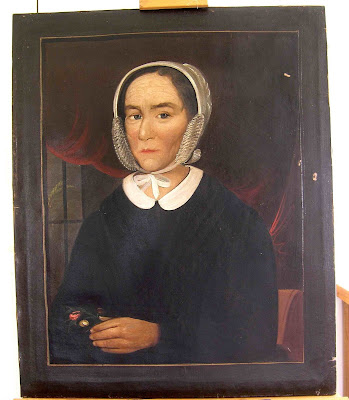 When I was a child, a dark and scary oil portrait hung over my mother's armchair in the living room. This was the 1950s; she sat there with her latest library books to devour, chain smoking cigarettes and appreciating her instant coffee, sometimes fortified. We kids all knew the painting was some ancestor of hers, but we weren't much interested. Besides, my youngest brothers swore the woman's eyes followed them when they ran through the living room. (More likely Mom's eyes-on-the-back-of-her-head, as she said, kept tabs on what they were up to.)

When a fine-arts restorer cleaned the portrait a few years ago, details emerged that shocked me.

I knew, by then, that the person in the portrait was named Eleanor, and she was Mom's great-great-great-grandmother. But taking the painting out of its battered frame revealed the painter's signature, and his note of when it was done, along with the phrase, "from a profile." The date turned out to be two years after Eleanor died ... and "a profile," I'm sure, meant one of those black paper silhouettes I tried making as a kid. And the year, of course, was before photographs were common.

When I learned more about the painter, I found out that he commonly painted "postmortem" portraits. He had assistants create a background, and he used his own sense of the person (and that person's community standing) to create a face to set into the center.

Whoa! All the little details came together at last and I realized that (despite one of my cousins always insisting that great-great-great-etc. Eleanor looked like her) the image in the portrait is entirely made up -- it's fiction! Or, as a more critical historian might say: It lied.

Now, I'm already working on a couple of other novels. That's just how it goes. It takes so long to do research, and see the heart of the upcoming book, that there is always something getting into first draft, something else being revised toward publication, and something just starting in the dark ... and some day it will be time to craft a story (probably a novel, but maybe nonfiction after all) about Eleanor. In spite of her portrait being "fiction," I want the American history in the eventual book to be both accurate and insightful.

Cut to the Presidential campaign of 2016, and First Lady Michelle Obama pointing out that she's been living for almost eight years in the White House -- an elegant structure built, in large part, by the labor of enslaved Black Americans. Look also at the past few years of news that have raised the cry that Black Lives Matter, something worth thinking about often as we confront the tilted statistics of who's serving prison time for what crimes. (Vermont's not exempt from those statistics, although I hope we try very hard to earn justice.)

Why think about those things now? Well, Eleanor was born less than 20 years after the Declaration of Independence was signed. She made her living, eventually, from the shipping trade, which for America often included shipping humans. So I have to ask: What part did America's dreadful enslavement of millions of its forced immigrants (and others) play, in Eleanor's life and success -- and in the lives of her own ancestors?

And that's part of why it takes so long to do the really good research. Uncomfortable questions like this one push me to read and learn at a level I would have considered "too much homework" in high school and even college. I'm now reading Wendy Warren's shocking, horrifying book New England Bound: Slavery and Colonization in Early America. She makes it clear that in the 1600s in New England, enslavement of people -- both African and Native American -- was expected and profitable. I'm checking all the names she mentions, against those in the family tree. So far, no direct matches.

But I'm sure there's darkness back there. And for this writer, that's where we start: in the darkness, facing it honestly, and hoping that courage and wisdom and love will help build a route toward the light.

* * *
Five Star/Cengage is publishing my next book, The Long Shadow, ion April 18, 2018. It can't be a coincidence that the novel, set in 1850 in a nearby Vermont town, begins with an argument over enslavement as a moral disaster and a political divider. Slavery's long, dark shadow ...