Unpacking a Vintage Postcard: The Little Revelations of Research 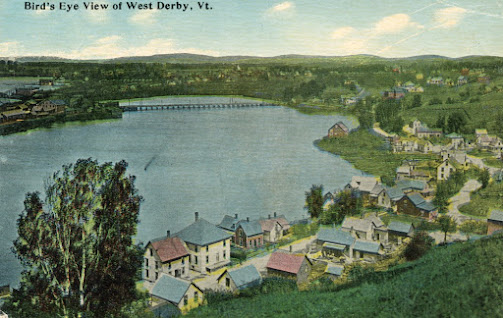 My husband Dave was the main collector of vintage postcards here. With a dozen want lists, ranging among his passions of Vermont history, AT&T founder and Lyndonville experimental farmer and philanthropist Theodore Newton Vail, the village of Gilman, and Jewish themes, he spent hours roaming the online listings, and something intriguing arrived in the mail most mornings.

It's taken me time to absorb his tasks in with mine, since his death two years ago. But I am now hunting postcards when I have time. I picked up this one for its charming "Bird's Eye View of West Derby, Vt." (which is now part of Newport, Vermont), thinking we might not have the image itself among his Newport and Derby postcards. 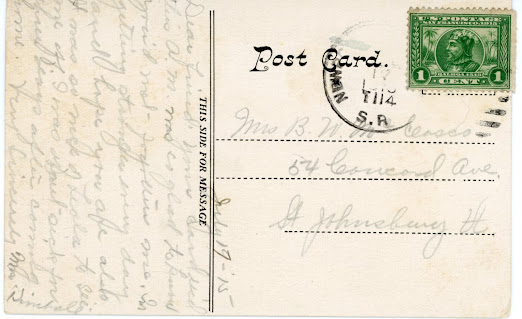 And then, of course, the back of the card drew me in.

It's hard to read, scrawled in pencil and overlaid with a Newport (Vt.) postmark. Even the postmark year is difficult to parse, though we can see it comes from the years when a postcard traveled for the cost of a penny stamp. Even the stamp is a challenge for my aging eyes! But with the aid of a lighted magnifier, I read "Balboa 1513" and marveled that this U.S. stamp commemorated the Spanish explorer's claiming of the Pacific Ocean on behalf of his nation.

The message, once you turn it upright, reads as follows:

Dear friend You card rec'd this a.m. Was so glad to know you'd not forgotten me. I'm getting stronger every day and hope you are also. It was so nice of Leola to see me off. I was about sick for three days after coming home. Very sincerely, Mrs. Kimball

I puzzled over the address for a while, and came up with Mrs. B. W. McCosco, 54 Concord Ave., St. Johnsbury Vt.  However, I thought I probably had the name wrong, since I'd never heard that name before. So I started pulling up town listings from the early 1900s. It didn't take long to realize that McCosco was indeed a local surname, and here's what I found:

Note that her postcard was addressed using her husband's initials, B. W.; also note that she was listed in the town as a "boarder" just a few years after her marriage. I wonder now ... had Basil left her alone for some reason? What caused him to die at the relatively young age of 48? Which years did Maude teach school, and where?

Which just goes to show: The more you pull out the clues from a postcard, the more mysteries you open up in response.