Looking for Landscapes of Earlier Times

Around the first of January, I finished a third full revision of the book that occupied me for both research and storytelling over the past two years. Set in 1850 in a very small Vermont village, it's now titled THE LONG SHADOW. I hope it will eventually find a good home with a publisher who will enjoy taking it out into the world. 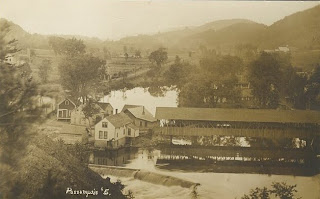 Writing THE DARKNESS UNDER THE WATER meant research for every page -- double-checking language, topography, economics, reading old newspaper reports and advertisements, and sometimes writing or phoning or e-mailing people who had shared their stories of the 1930s with me during the past thirty years, to refresh my notes and memories. Eighty years in the past is not all "past" for many Vermont residents. In my small town, we are facing the need to repair and replace many bridges in this decade. They're all wearing out more or less at the same time, because they were mostly replaced at the same time: 1928. The Flood of '27 tore them apart. It stripped riversides, smashed buildings, tore apart landscapes. I'm adding a postcard here to illustrate. 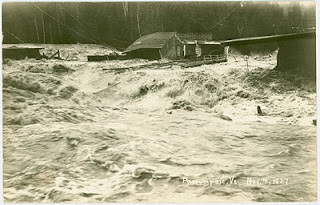 Another gem for this 1930 novel was a set of images recently posted online, from a book that only existed in a few copies: a family history of Upper Waterford, the very real village that would eventually vanish under the water. Here's the link; be sure to look at the final photo of the last building standing before the waters rose to form the massive lakes behind the power dam. It was the church, which was burned in place, rather than being taken down to "re-use" the lumber. (Its bell still hangs and rings today in the Lady Chapel in East Barnet.)

Working back to 1850 for THE LONG SHADOW required at least five times as many "pauses" per page to double-check research as I wrote. My best resource for the shape of the village, since I based this on what is now North Danville, was an impressive master's thesis by Gerard W. Lamothe, called "One Village, Two Centuries, Several Families," issued in two volumes -- one that gives the words and connections of the village residents, and the other simply images. There are postcards, photos, even sketches. What a resource!

But they don't necessarily reflect exactly what the village looked like in 1850, when photography wasn't yet commonplace or easy. For that, I used early Vermont maps and atlases, as well as descriptions in letters, books, and again newspapers.

But there is nothing quite so definite as walking the land itself. Of course, we all bring our imaginings to even this physical reality, so it's been good for me to walk with people whose minds and hearts are full of the old days. And when they can't be walking with me, I've used three books in particular for information and perspective:

* Hubka, Thomas C., Big House, Litte House, Back House, Barn: The Connected Farm Buildings of New England. This helps me to envision how structures and living arrangements changed over time.
* Wessels, Tom, Reading the Forested Landscape: A Natural History of New England. Wessels gently pulls apart assumptions to reveal what a stone wall really stood for and how the land around it was used and valued.
* Cronon, William, Changes in the Land: Indians, Colonists, and the Ecology of New England. Cronon demonstrates how the European views limited what early colonists thought they saw and knew -- and how the land had been valued and interwoven in the lives of Native peoples in ways the invading settlers failed to observe or respect.

A picture is worth a thousand words and more ... and is evidence of a sort. But how I look at an image and what I believe from that image depend on how much I understand beforehand of the people who captured the picture.

So the bottom line is: To understand a landscape of another time, even when there are many pictures of it, requires a continued listening ear toward people and their experiences. We tell each other our stories.
Posted by Beth Kanell at 4:39 PM No comments:

Kudos to Vermont legislator Anne Donohue (R-Northfield), author of a resolution that would finally offer an official statement of regret for the actions of the Vermont Eugenics Program in the 1930s.

I was especially glad to read what this article reports on the testimony of Judy Dow, who is urging that the legislative apology be extended to more of the people wounded by this project, under which thousands of Vermonters were targeted as "defective." Although other states created similar projects and passed laws similar to the "voluntary sterilization" law that Vermont passed in 1931, the Green Mountain State saw a particular focus on its Abenaki people as targets of the project and law. Effects of that focus endure, and continue the injustice; recognition through legislative apology is one step toward justice.
Posted by Beth Kanell at 2:55 PM 1 comment: