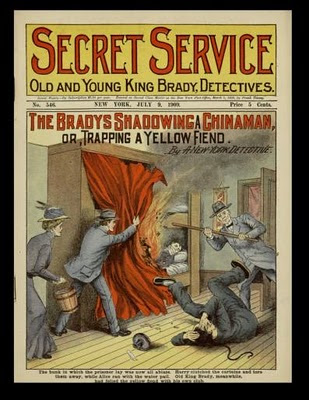 I now have copies of almost all the news articles that related to the death of Sam Wa at age 75 in St. Johnsbury, Vermont. The 1921 murder of this aging downtown businessman was not officially solved, in spite of a detective being hired. And it's the center catastrophe of the (fictional) mystery I'm writing, Cold Midnight.

Research never stops, not during the writing process, and not even afterward. One strand I've been exploring is the meaning and use of the word "Chinaman" in 1921. From 2010, it's easy to ignore the term, assuming it had the same kind of descriptive value as "Irishman" or "Englishman." But in fact, it was a slur, an offensive word. Used for all Asians at the time, it made clear the American ignorance of people who lived at or came from "the other side of the world." Every dictionary notes that the term was (and is) "offensive." And the Urban Dictionary gives a modern description of this, as the offense of the term endures:


A term used to define a person of chinese descent. Depending on the situation of where the word is used, it can be offensive to a man of Chinese Origin espeacially if hes not Chinese but of Asian descent. Doesnt seem racist but it is The term China Man was coined by the racist ignorant white man.
Hes a China Man!
HEy China Man pick that up for me!
Hey CHina Man go back to China!
Hey China Man I didnt know you grew up in the U.S.

So when we read the articles and editorials in the local paper, the Caledonian-Record, about how the community should respond to the murder of Sam Wa, we need "1921 ears" to understand the sermons that the local ministers offered, when they said on the Sunday after the murder that Sam Wa's death should NOT be treated as a case of "he was only a Chinaman."

They weren't saying Sam Wa was just a poor Chinese immigrant; they were weighing a label that held the power of the oldtime label "nigger," a way to distinguish a person who never be allowed to rise to full humanity in the eyes of the culture of that moment.

For another angle on the image of Chinese in America in the 1920s and 1930s, take a look at the Jill Lepore write-up of Yunte Huang's new book, Charlie Chan: The Untold Story of the Honorable Detective and His Rendezvous with History, which just appeared in The New Yorker online.
Posted by Beth Kanell at 10:28 AM No comments: