A few weeks ago, through a connection with a cousin of mine in Israel (Inbal Jaffe), I received a photo that apparently has been legendary in my family's history. I didn't know it existed until Inbal attached it to an e-mail, but another cousin, Phillip Minden, told me he'd long searched for it. When I saw it, I looked from left to right at the "Three Henry Mindens" in the picture -- noting Dr. (of law) Henry Minden in the center, a man whose generous life I've recently learned about -- and suddenly realized the man on the right was "my" Henry Minden, a man who lived on Long Island when I was a child growing up in New Jersey. More than anyone else, more than my "real" grandparents, who all lived in England, this Henry Minden did for me and my siblings what grandparents do for their grandchildren: He welcomed us at holidays and on Sunday afternoons, hid Easter eggs around the garden for us to find (even though he was Jewish), encouraged us to play musical instruments, and gently assured us that a life of books was a very good life. 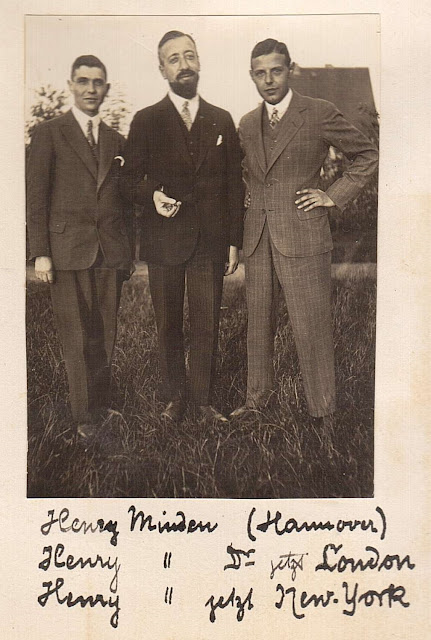 As I grew older, my parents revealed a small bit of Henry's story: He and his wife Betty had escaped Europe during the Second World War, via Holland, they said. Later, when I read the story of Anne Frank, I thought maybe they had hidden there, and been sent out secretly. But I didn't ask for more details -- in the family where I grew up, some things you didn't ask about, and most of those had to do with the War and the Camps ... the concentration camps.

Henry died while I was a teen, and I had never been to a funeral. Struggling to read my father's face when he asked me in a neutral tone whether I wanted to go to Henry's, I said, "No thank you." I think my father's relief related to not having to explain to me what I might have heard at that funeral. It was the family's job, as he saw it, to put the sorrow of the past behind, and not speak of it.

So it was that when I turned 50 years old, I knew almost nothing of my father's side of the family. He had said, to the child I was once, that "nobody close" to him had perished in the camps, or the war.

Yet the man with whom I courted that year (and soon married) said to me, "I think your father's family name is in the books in my personal library of Jewish life and history." So, far too late to ask for details from my deceased dad, I learned something in those books of Henry Minden after all ... and put into perspective the crumbs I had kept about my grandfather Ernest, who was my father's father. It took more years before I realized that I also had important "crumbs" to investigate about my father's mother, Lena.

And then everything I thought I knew about my father's family fell apart, as I found that Lena's father (I have a photo of him with my dad!) apparently perished in Auschwitz in 1942; just last year, I learned of my cousin Max who died fighting for "our side" in Italy; and now I think I've found another close member of the family who may have died in the war.

But here is what I know for sure: Henry Minden number 3, the  Henry on the right, was a kind man with a deep love of art and music, and who loved me. My father's family helped many others to reach safety and justice during the war, and afterward. And, as I have slowly come to realize, my mother's own repeated mention of Quakers in her family turned out to be a link to others who wrestled for safety and justice in America's long history -- whether in New England or New Jersey or Philadelphia.

Now I have this heritage, shakily assembled, slowly becoming more certain, of justice seekers and, put politely, secret keepers. I find that there's some of each of those in me, after all, and in my writing.

But most of all, as I realized last week, tears running down my face while I gazed at Henry's familiar face, my family has given me love.

Now, bear with me one more paragraph for an announcement: I am enormously delighted to say that the small local library in my town here in Vermont, the Davies Memorial Library, is acquiring a collection of books on social justice next month. Here are some details -- and I am happy to say that I've had a role in helping this come together:


Tuesday February 16, Educating Ourselves About Social Justice, at the Davies Memorial Library in Lower Waterford at 6:30 p.m. LSC Professor Patricia Shine and several of her students present and discuss some of the most influential titles on social justice. Books available from the library afterward. Free and open to all. Info: 748-4609 and davieslibraryvt@gmail.com