Maternity Homes in Vermont: A Research Story (and Invitation!) 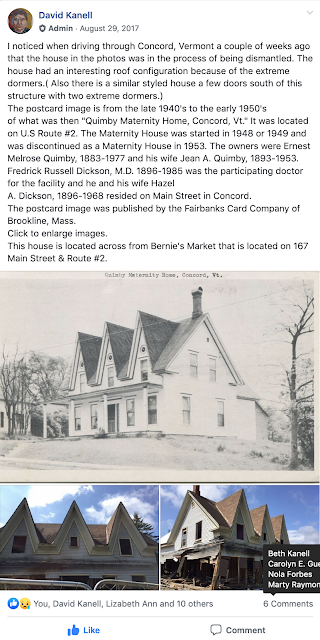 It began with a postcard. My husband Dave (who passed last April) collected them: colorful Vermont scenes, yes, but more importantly the black-and-white ones from the late 1800s and early to mid 1900s that showed actual scenes, especially in the Northeast Kingdom. There are hundreds of St. Johnsbury and Lyndonville images in his collection—but, proportional to both town size and events that seemed worth marketing as photographs, there are very few from, say, Granby or Victory in Essex County.
Or from Concord.
Dave plunged me into a new research project when he found a card labeled “Quimby Maternity Home, Concord, Vt.” His knowledge of postcard publishers and some quick investigation prompted him to added the information “1949–1953.”
As we, and then I, probed further, we found more than 50 documented births that took place, not just in the Quimby (also called Graves, for nurse Ardella “Nana” Graves) Maternity home, but also in the Austin Maternity Home in the same small town (this one, run by Leah Virginia Austin). And both were clearly “supervised” by the local doctor, Frederick Russell Dickson, M.D.
“Maternity homes” in the rest of America seem to have often been places for unwed mothers to give birth and send their babies out for adoption. Dave and I found a single request from an adoptee born in 1946 at a Concord maternity home for clues to his parentage. But that turned out to be the exception. Online access led us to birth certificates of many babies simply born in these more supportive, medically encouraged “homes.” Mothers could arrive a day early, stay a few days afterward, have a break from parenting and get a good start with the new arrival.
But such maternity homes were not well documented. In the case of the ones in Concord, Dr. Dickson worked under contract for the local paper mill, which provided him space for a “dispensary,” and cared for many more illnesses, injuries, and preventive cases than the babies being born—and no records from the two maternity homes have been located.
So Dave and I went to local Facebook “pages” and “groups,” where residents current and past share their memories. To our astonishment, we discovered another maternity home that took patients at the same time period, the early 1900s, and it was about 20 miles from Concord, in Lyndonville, Vermont. Then word of a second Lyndonville maternity home came, with oral confirmation that it had started in Burke and relocated.
This is how a small postcard research project begins to spin outward!
The community of local history researchers is compact and supportive. This summer and fall, I began writing to others in other towns, to see whether the maternity homes of this part of the Northeast Kingdom were an isolated phenomenon or part of something wider.
After several negatives, I heard from local historian Joan Alexander of Glover, who passed along work by Darlene Young in her “A History of Barton, Vermont” (1998). Young outlined Barton’s medical providers in the late 1800s and mentioned Dr. Percy Buck, born in Charleston, Vermont. Dr. Buck arrived in Glover in 1914, and in 1935 moved to Barton. Young wrote, “During his career, he delivered over 2,000 babies, many of them at the Cottage Hospital.”
I hope your reading “ears” just perked up the way mine did. Eagerly, I discovered from Young’s account that the double factors of the 1918 “Spanish” influenza outbreak and the changes in World War I era medicine resulted in nurse Harriet Austin in 1913 working in Baron at the “Sunshine Sanitorium,” which Young said “served a number of functions, providing both professional nursing care as well as a suitable place to handle surgical procedures. Increasingly, the sanitorium attracted maternity patients as well.”
Then in 1923 a new medical graduate in Barton, Dr. Elwin M. Nichols, purchase a large home “with plans to establish his own hospital,” Young wrote. “He hoped to provide patients with both a comfortable, homey atmosphere and state-of-the-art medical equipment.” Soon the Nichols Hospital took over for the late 1920s.
When Dr. Nichols yielded to his own medical problems, nurse Bernice Atwell opened the Cottage Hospital in Barton. Her particular focus was on maternity patients. Young noted its advantages over home delivery, including sanitary conditions, modern equipment, and rest for the patients. The percent of births held there increased steadily, drawing from as far away at Coventry and Craftsbury. Around 1950, however, trends shifted, and in 1954 Atwell, then aged 65 herself, closed her little hospital.
Cottage Hospital! I darted to records of the historic Cottage Hospital in Woodsville, New Hampshire, across the river from Wells River, Vermont. It began in 1903, in a building that dated back to 1795, when it was the Cobleigh Tavern. Then it yielded to a “modern” and larger hospital opened in 1960.
Now the tiny maternity home trend of the Northeast Kingdom had merged into a statewide trend, for I found another Cottage Hospital at the opposite end of the state, Grace Cottage Hospital in Townshend, Vermont. Its timeline differed a bit, but it clearly belonged.
It’s surprising to realize that even in medicine, which relies so much on records, the phenomenon of maternity and birth has been relatively unrecorded. I hope this research will trigger more—in the footsteps of midwife Lydia Baldwin of Bradford, Vermont, whose records are represented at Dartmouth College today: 926 births from 1768 to 1819, of which only 2.9 percent were stillbirths, despite the challenges of conditions and knowledge.
Know more about maternity homes in your area? I hope you’ll share the knowledge!

CAPTIONS:
The Facebook piece that Dave Kanell posted, which launched our grass-roots research into how maternity homes functioned in the Northeast Kingdom.

Mrs. Ardella (“Nana”) Graves, who ran one of the Concord, Vermont, maternity homes. Photo from the Facebook feed of the Concord Historical Society.
Posted by Beth Kanell at 10:22 AM No comments: 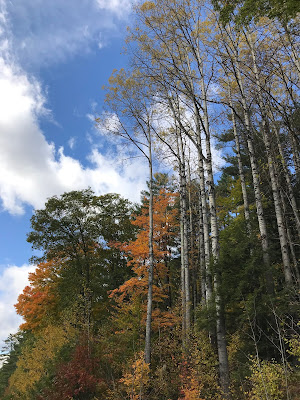