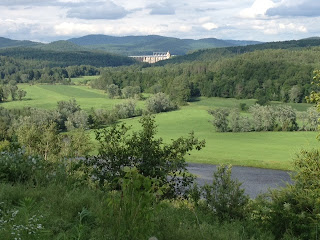 The old adage "write what you know" is very different when applied to historically hinged fiction. There are writing days when every paragraph demands that I stop to double-check details, make sure that an easy assumption actually fits the facts. For Cold Midnight this meant compiling the small details of 1921 life in St. Johnsbury, Vermont, and some careful mapping of 1921's Chinatown layout in Boston as well.

The toughest research I've done so far was probably the five years or so leading up to The Darkness Under the Water -- in part because the emotional effects of the Vermont Eugenics Program are far from over, and people who told me about their parents' and grandparents' experience of that time often didn't want to be explicit. For example, it took a long time before someone finally whispered to me the name of a local doctor who might have performed operations in the 1920s on women whom he believed should not bear more children ... long before that whisper, I'd suspected such a presence, but it was important to confirm it. 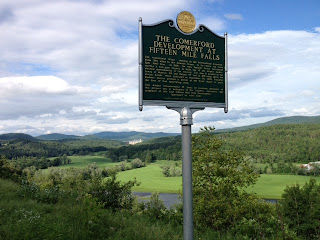 The two photos shown here were taken just a few feet apart. One is the simple (but lush!) scenic view from the rest area on Interstate 91, just north of the Barnet, Vermont, exit. It suggests a forested landscape without many people. The presence of the county seat is well hidden -- along with the dark side of some lives in the region, as well as the thriving movement of technology and information in the towns below.

The second photo carries some details of the history of what's out there: Comerford Dam, so impressive in 1930 that for its first day of operation, the U.S. President triggered the "on" switch; there's even a description of the size of the lake formed behind the dam on the Connecticut River. But the sign doesn't mention one of the most significant aspects of this dam: It was the first on this body of water to NOT have a sluice gate for logs to pass through -- marking the end of the great river logging era in Vermont.

What we know about a landscape shapes what we believe about it. Knowledge nourishes a well-trained writer's imagination!
Posted by Beth Kanell at 10:55 PM 2 comments:

I Love a Good Mystery/Thriller/Suspense Novel ... and Review Them

Just realized some wonderful readers are looking here for the latest in mystery reviews -- but they are at the OTHER blog (blush ... yeah, I've got a few): kingdombks.blogspot.com

Sorry for the extra jump needed!
Posted by Beth Kanell at 5:48 PM No comments: