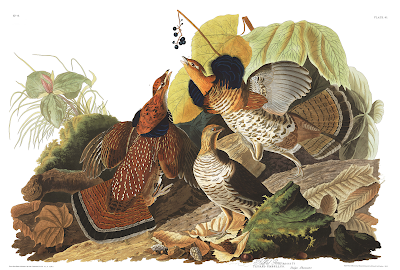 One of the challenges of writing a novel set in 1852 is the details that aren't recorded, but that I still want to get "historically accurate" for the story. Today's puzzlement is how to talk about the wild bird known to American colonists, based on their British experience, as partridge -- but corrected in name to ruffed grouse. John J. Audubon painted the birds (see above). And Karen A. Bordeau of the New Hampshire Fish and Game Department also wrote this in 2015:

Regulation of grouse hunting received no attention for a long period. The first act protecting birds was passed in 1842, affording a breeding and rearing season free from molestation. They could be legally taken between September 1 and April 1, and permission of the landowner was required for hunting.

The regulation was repealed after four years, and grouse remained unprotected until 1862. The second law protecting grouse, passed in 1862, established a shorter season – September 1-February 28 – and four years later hunting was further curtailed by closing the season on January 31. Snaring had been a popular method of capture, and in 1885, was forbidden. By 1929, grouse were so rare all over the state that the Legislature completely closed the season in Coos County on the Canadian border, and in Cheshire County bordering Massachusetts.


And the New International Encyclopedia of 1917 says this: 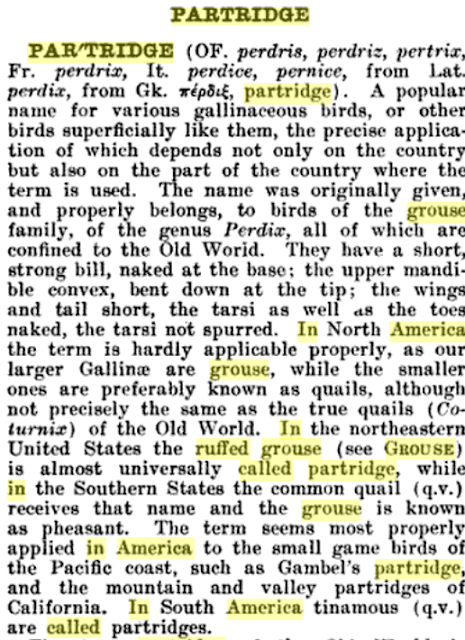 So, what do my characters call these birds? That's in chapter 4 of THIS ARDENT FLAME (Book 2 of Winds of Freedom).