Jane Williamson, director of Rokeby, Vermont's premier authenticated Underground Railroad site, often points out how literal the thinking is of third graders, who arrive at her historic center, eager to see the "trains that run under the ground." She has many other things to show and teach them, but sometimes they are still baffled that they haven't yet found the train.

With adults, both director Williamson and I find widespread attachment to the romance of the Underground Railroad myth in Vermont. As she says, it would be better to call the movement of African-American fugitives here in the 1800s "the Aboveground Railroad." Most Vermonters believed slaveholding was immoral, and that all humans should own their own lives. Dark-skinned fugitives arriving in the state weren't just assisted in their travels -- at places like Rokeby, they also could polish their skills for independent living and move toward owning their own land and businesses, from earned wages that they saved. Moreover, Vermont was so far from the slaveholding states of the American South that the vision of the fugitive cowering in a hidden room while the slavehunter passed by was a fiction; African Americans worked on farms, established homes, and nurtured their families here.

Many otherwise well-informed adults still leap to the conclusion that a "hidden room" in Vermont had a connection to the heroic labors of the Underground Railroad. Usually there are other reasons for such rooms: for hiding alcoholic beverages, or money, or, much later, Chinese migrants barred from entering America from 1882 to the First World War. Sadly, some rooms may have been the final resource of family members who weren't "fit to be out in public." Increasingly, rooms found near chimneys or in much-rearranged homes are remnants of homeowner layout changes -- say, changing from a wide old fireplace to a narrower chimney for a furnace. 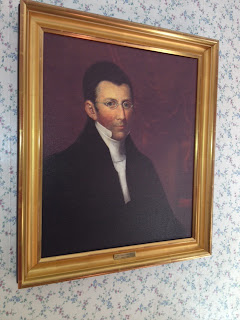 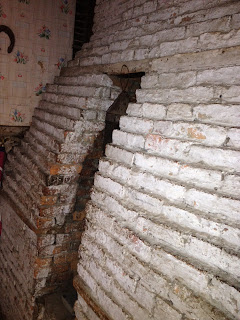 At the Goodwillie House in Barnet, Vermont, a site that plays a role in my book The Secret Room when Shawna and Thea visit to test some of their ideas about the Underground Railroad, there is a double-walled section of the cellar that long had a rumored description as an underground railroad hiding place. I'd rather see it as a place the Rev. David Goodwillie -- who served Barnet as pastor, postmaster, and more -- might have put a few things he didn't want all his relatives to see. Or perhaps his wife stored the best potatoes and carrots there, to still have a few by the time the winter dining reached Easter Sunday!

Here's a newly acquired portrait of the Rev. Goodwillie, as well as a photo of the brickwork inside the house. There's a lot to explore here, and a lot to discover. Historical research backs up the best of the stories of the Goodwillie House, and one of my favorite bits is knowing that the family here had the first sheet-iron stove in town, and even added pipes to bring water inside the house, quite an innovation at the time.

Thanks so much for the photo of the portrait of David Goodwillie! I wouldn't have known it existed, otherwise.
Thanks for your writing about the history of Vermont!