Hiking Her Way Into a New Biography: Annie Gibavic and the Adventures of Writing 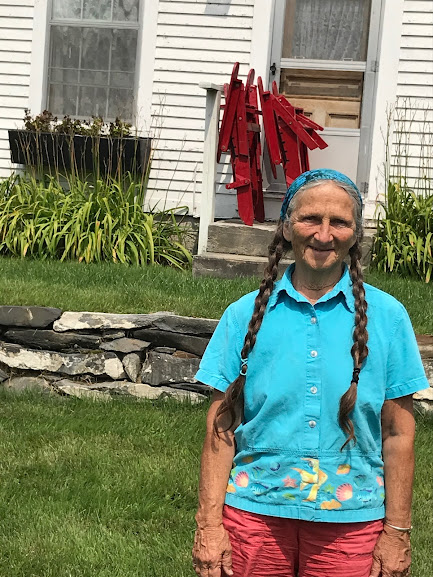 Annie Gibavic, who lives in Sutton, Vermont, says she's always loved to hike. In 2003, Bondcliff Books published her memoir of a 3-week "through hike" of Vermont's Long Trail. Called ALONE BUT NOT LONELY, the book was well received and demonstrated her ways of challenging herself and finding joy.

At that time, a woman hiking alone was still fairly rare; comments on the discussion site GoodReads reflect how the book was valued:

It's been a long time since I last read this book, and when I was a kid it inspired me to want to hike the Long Trail. Before I left for my own hike on the LT this year, I picked it up again to revisit Annie's story. Honestly, her trail journals are just like any other trail journals, but I think when I was younger, it was a lot more unusual to find a woman doing this kind of thing alone. I'm still thankful for how my own hike was sparked by this one book picked up in a thrift store so long ago. Vermont is a magical place, and the LT is a very special trail indeed. 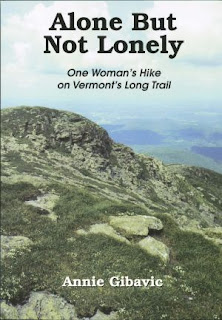 When Annie herself was a teenager, she interacted often with her aging great-aunt Dorothy C. Walter, a woman born in the late Victorian years whose life involved unusual paths for that time. Dorothy not only performed the expected roles of caregiver for several family members -- she also taught "Americanization" to many immigrants in Providence, Rhode Island, and brought back explorations of her adventures there to women's and church groups in Vermont's Northeast Kingdom. For many listeners, Dorothy—an ardent writer herself—may have been the first to explain to her home-grown Yankee audience that immigrants need not be "dirty" or "ignorant" and that their foods, even though seasoned in ways Yankees never indulged, could be delicious. (You can read my recent feature on Dorothy here.)

Annie's personal memory of Dorothy from her teen years is really a classic of how a not-yet-grown girl sees things: She recalls Dorothy's large size, and the tremendous efforts required to assist her on the narrow staircase of the family home, when the elderly woman broke her hip!

But as an adult, Annie became a teacher herself, and with her mother Annette's edited packets of Dorothy's writing, Annie began to identify more with her great-aunt. At first she taught at an alternative school in Peacham, with a curriculum based on musical theater. "Dance was my first love," she explains, and it led her into work at a choreographer for the Vermont Children's Theater and for a high school. Further, as an art teacher at Miller's Run School in Newark, VT, for 25-30 years, she also taught ESL, or English as a Second Language -- that is, English for immigrants.

And all the while, she hiked, and she re-read the family stories, especially Dorothy's. One day she suddenly realized that "Americanization" and teaching English as a Second Language overlapped substantially. She marveled that she hadn't realized until that moment how closely her life meshed with her great-aunt's adventures.

Over the past few years, Annie's been writing another book. This time, like Dorothy and like Annie's mother Annette, the writing focuses on a relative: Joseph Hall, the "adventurous brother," she says, of her great-great-grandfather Dudley P. Hall. Bondcliff Books, which published her trail book, is considering her manuscript. It would be both history and "family memoir," and pulls her life even closer to Dorothy's.

I met with Annie a few weeks ago to learn about Dorothy -- we sat outside Café Lotti in East Burke, so we could chat without masks. Astonishingly, we were sitting next door to the former home of Joseph Hall.

So how could I resist? When we finished talking about her family and their intriguing history, I asked Annie to step next door so I could take her photo with Joseph Hall's house behind her. I hope her book will be published soon, so I can enjoy this adept writer and hiker's view from the mountains today.