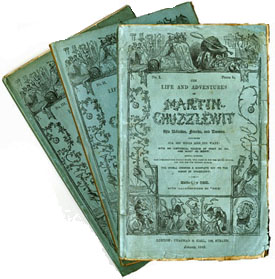 Publishing a novel in chunks in a newspaper turns out to have been a tax dodge -- by printing on a different paper size, newspapers in Victorian England could claim they were issuing "brochures" and thus dodge a special tax assessment that would have struck them as ordinary news publications. What a break for Charles Dickens! Plus, the author of Great Expectations, Oliver Twist, and The Christmas Carol, as well as A Tale of Two Cities, had three necessary skills for releasing his books chapter by chapter: (1) He could write roughly equal-sized chapters, necessary for the nuts and bolts of such publishing. (2) He was a master of the end-of-chapter cliffhanger. (3) He could reliably write 17 pages per week.

This month I'm doing be best to follow in Dickens' footsteps. I'm writing a detective novel, featuring Vermont's own "Nancy Drew"-style character, college freshman Felicity "Lucky" Franklin, called home to probe the shooting of her father (and her mother's arrest on suspicion of murder). It's called ALL THAT GLITTERS. I'm doing it on a public website, Wattpad, where hundreds (maybe thousands) of other authors are also writing chunks of fiction -- many of them paranormal romances. I can see how audiences would treat such books sort of the way the Americans did the work by Dickens, most especially chapters from The Old Curiosity Shop, in which readers knew in their hearts that the beloved character Nell was probably going to die. A Time Magazine review of The World of Charles Dickens by August Wilson began:


When Fyodor Dostoevsky was sentenced to four years in a Siberian labor camp, he requested only one kind of reading matter: books by Dickens. In mid-19th century New York, ships arriving with the latest installment of Dickens' The Old Curiosity Shop were met by anxious cries from the dock: "Is Little Nell dead?"

Anyone who's written for a daily newspaper, or a demanding college English professor, knows that writing 17 pages per week isn't that unusual. Especially if you're getting paid for it, and you don't have to do much of anything else in your days/nights.

The challenge is when you're not getting paid a bit, so your "day job" has to keep taking most of your time -- you're still cooking for your family -- you've got car appointments and doctor visits and the yard needs your care ... Heavens, it gets interesting that way!

Still, I'm carving out my couple of hours every three days, to write the next chapter and post it. I've complete six of them this way.

And I've discovered the catch: I'm starting to realize the things I should have added to the earlier chapters. I've got notes on envelopes, napkins, grocery lists -- "Go back and put in ..." -- and I'm trying to hold in my mind, very gently so they won't go stale, all the twists and deepenings that I want to add in chapters 12, 24, 33. How the dickens did Dickens pull it off?

Don't stop now. Check in for chapter 7 on Friday evening. Oh, you haven't read the first six yet? Don't panic -- just slip on over to Wattpad and get reading. I promise what one of my correspondents is now calling Kanell Kliffhangers. How long will Lucky Franklin's luck hold out, as she investigates criminal behavior that's already blown a bullet through her own dad?? More soon ...