The Brighter the Light, the Darker the Shadow 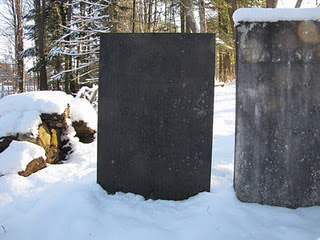 This photo is from a tiny cemetery just up the road from where I live; the stones in it mark deaths that took place about two hundred years ago, but -- they also mark lives. They stand for people who chose to farm and raise children on a high ridge of land where they could look west toward an amazing landscape of rolling mountains. And at that time, most of them probably had no idea what lay beyond those mountains. One of the markers here (the left-hand one; click on it to make it larger) is for Mrs. Submit Adams -- whose heritage, according to local writer Alan Boye, probably included Abenaki (Native American) family members. She may have been the earliest part-European to live on this ridgeline.

I think that the more we learn about the people who've gone ahead of us, the more courage we can summon. We see how they lived with the darkness of winter nights, and the darkness of their souls sometimes. And for many of them, we see how they pulled themselves together. They witnessed wide skies of brilliant stars, or big-bellied glowing full moons; they woke again in the morning to the winter calls of chickadees (tiny birds that refuse to leave here in winter), the sparkle of sunlight on icicles, the bright ring of harness bells on horses. They left us their names, and sometimes their stories.

When a good novel follows a character's path through darkness, it shows where the light is also rising. It calls us to take the next right choice, take another step forward, sing something out loud for the friends following us through the woods. It was Carl Jung who said, "The brighter the light, the darker the shadow." But for the stories I want to research and tell, the saying may sometimes go the opposite way: "The darker the shadow, the brighter the light."
Posted by Beth Kanell at 3:32 PM