The Long Line of Research 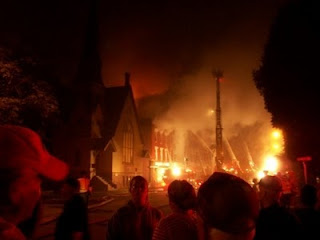 Last week I read In the Heart of the Sea: The Tragedy of the Whaleship Essex, by Nathaniel Philbrick. Grippingly told and heavily supported by research, the book explores the final trip of a Nantucket whaling ship -- struck in the Pacific Ocean by a belligerent whale, so that the crew had to try to survive literally months on the ocean in small, leaking boats, starving. I could hardly put it down.

And that's a tiny fragment of the research that will go into a novel that I probably won't start writing until 2013 or so! The main character will be a young woman unexpectedly widowed in Provincetown, while pregnant with her second child; her husband was a sailor on a whaleboat. She was my five-greats grandmother, and I have her portrait. I imagine her life, and it becomes part of a story.

Much closer to home, and sooner to be written, is a novel that involves a string of downtown fires in St. Johnsbury, Vermont. I've drafted a chapter in order to have a starting place -- and I know that the person looking at the fires is named Addie. She's scrambling to keep up with what the local newspaper expects from her. "Anyone" can take photos of fires today, but digging into the stories behind them takes courage and persistence. Addie's a good candidate for that! Too bad that one result of her digging is the appearance of ... well, it looks like a ghost to her. The book title is THE FIRE CURSE and I'm hoping to get it rolling in February.

At the same time, I'm outlining two others: BEAR-SHADOW (I am learning a lot about weather, and just got a great book on crystals to help with this one), and OPHELIA OF THE NORTH (don't ask, I can't talk about this one much yet; the characters are talking in my other ear and it confuses the conversation!).

So that's how the research strands continue: I'm still filing materials that fill in the gaps behind The Darkness Under the Water (published by Candlewick in 2008) and polishing the text of The Secret Room, which should be available in late summer this year. But meanwhile, everything else has to stay rolling, with information, images, and more. By the way, the photo here is of a recent downtown fire in St. Johnsbury, Vermont, about five miles from here -- Dave and I were able to see the light of the fire in the sky that night.
Posted by Beth Kanell at 1:40 PM