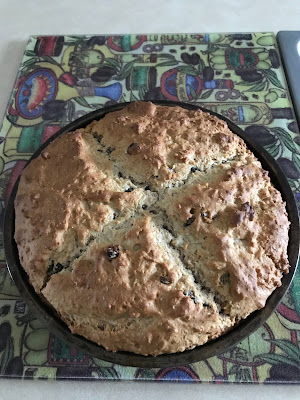 The best of St. Patrick's Day to you! And may your luck be cheerful and in all the right directions on this fine March day.

It's a day that I like to celebrate by making Irish soda bread, and this year, just for the fun of it, I tried out the whole-grain boxed mix provided by King Arthur Flour, one of our Vermont-focused businesses. Very tasty, and it didn't cut much into my work time this way! 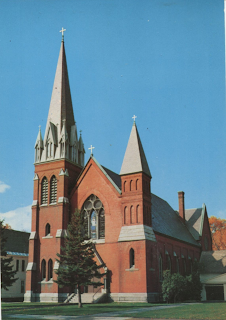 It's a good moment to remember that being Irish once meant a great deal in St. Johnsbury, Vermont. Just a few decades ago, the town's residents in response to the Census notched up 30% with Irish heritage. Significant in the area was the presence for decades of two Catholic churches: one "French" (mostly French Canadian, with Mass provided in both Latin and French), and "Irish" (Mass in Latin and English). The "Irish" church was St. Aloysius, pictured here; after the "French" church, Notre Dame des Victories, burned (yes, arson), the congregations merged and renamed the new church group St. John the Evangelist. Here's the building, from one of my late husband Dave Kanell's postcards.

The most recent available Census data, from the 2017 American Community Survey (the newer name for this batch of Census detail), showed 10.1% of Americans mentioning Irish heritage; 17.3% of Vermont residents; and 14.4% of those responding in Caledonia County (where another 14.4 percent mentioned French, 11.1% French Canadian -- should we add those together? -- and 18.2% English heritage; yes, Scottish comes in at 5.9%, and Italian at 5.5%). That's about one-seventh of the county with Irish heritage!

When I visit my New York City grandsons, I like to step across to their neighborhood's amazing Irish Hunger Memorial. Here are two photos of the structure, taken by Wally Gobetz and shared on flickr (thank you!); there's a description of the memorial added below, and if you don't have time to read it all, just keep this in mind: It's built from an actual stone cottage from Ireland, like the ones people lived in at the time of the potato famine there. I imagine the mud and stone and starvation made these homes feel terribly, frighteningly cold. 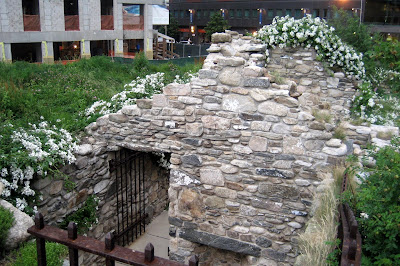 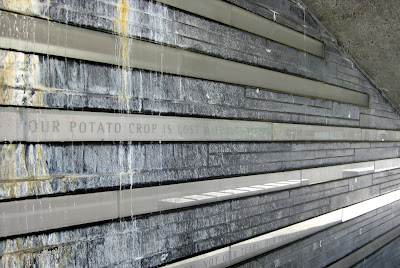 In fact, we have some great descriptions of exactly that, from Asenath Hatch Nicholson, a woman originally from Chelsea, Vermont, who left what comfort she'd found in New York City to go and see the starvation conditions for herself back in 1844. See my earlier discussion of her work here.

Now, before I go spread some good Vermont-branded butter on my next chunk of Irish soda bread, one more important history item: The first to use "baking soda" in bread recipes were not the Irish, but Native Americans, says noted food writer Gillie Houston -- see her explanation here -- and the recipe drifted to Ireland, as that region adopted agriculture and recipes for locally grown "soft" wheat.

You just never know what you'll come across, when you start digging into history. Or baking!

***
[memorial explanation originally published at https://www.atlasobscura.com/places/irish-hunger-memorial]
A winding path is lined with blackthorn, foxglove, and ling heather, marked with 32 rocks each engraved with the name of an Irish county. The quarter-acre of Ireland on the edge of Manhattan is a memorial to the over one million Irish who died during the Great Famine of the 1840s, as well as those who continue to suffer from hunger.

Designed by artist Brian Tolle, the Irish Hunger Memorial in Battery Park incorporates a Famine-era stone cottage brought over from County Mayo, Ireland, and reconstructed as the heart of the monument. Visitors can enter directly from the street up a path through the suspended field, or through a tunnel lined with granite and words behind glass remembering worldwide hunger crises, while a ghostly recording plays voices recounting famine.
Room has been left for more words to mark new hunger crises. From the top of the field at 25 feet in the air, there is a view of the Statue of Liberty and Ellis Island, the first stop for many of the over two million Irish immigrants to the United States.