"Wrap Yourself Up in Art": Clarinet, Accordion, Percussion, Voices, and a Father's Love, from David Chevan 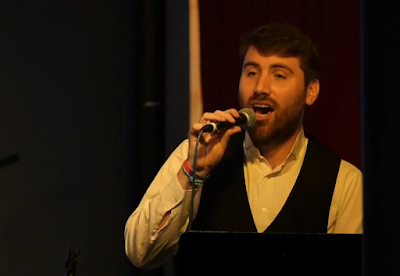 This letter reached me recently, and the video gave me such joy that I figured I'd better share it! So, with permission from David Chevan, here you are (don't worry about the YouTube link looking like it's to a very long piece -- it's actually cued to a shorter portion):


Since you can’t go out to hear live music, I thought I’d share a live music recording with you.

One thing that attracted me to Camille Pissarro was how many of his letters were about his love for his family. He and his wife, Julie, had 8 children, one died at childbirth, while two others, his daughter Jeanne and his son Felix both died at relatively young ages. I was moved by a series of letters he wrote to his oldest son, Lucien, as he shared with him first the news about Felix contracting tuberculosis and then only a few days later a letter about his brother dying from the illness.  If that wasn’t enough, Lucien was, at the time of his brother’s death, recovering from a brain illness that had almost cost him his life.  In those letters I saw a father struggling to console his son while dealing with his own grief.  And in those letters and in this song, I see a parallel to our own moment.  How do we deal with our sadness and our love when we cannot be with one another?  For Camille Pissarro the answer was art.  Pissarro urged his son to use his art as way to recover from his illness and as a way to deal with the death of his brother.  “I want you to wrap yourself up in art,” he wrote.  I was so taken by this that I shaped those words into the chorus of one of the songs of the work.

Singing the words of Camille Pissarro is Cantor Malachi Kanfer.  He’s accompanied by members of the Afro-Semitic Experience including Adam Matlock on accordion, Will Bartlett on clarinet, Jocelyn Pleasant on percussion, and Alvin Carter, Jr. who both plays drums and has the part of the narrator.  If you’re interested, you’re welcome to watch the whole work (which means you’ll also get to see Cantor Martin Levson who sings the words of Edgar Degas), but this link is cued up to the song, “Wrap Yourself Up in Art.”

I hope you are staying safe. I hope you all stay healthy. And I hope you can find something meaningful and satisfying to do with this time apart.  “Wrap yourself up in Art.”

Looking forward to seeing you all on the other side of this.