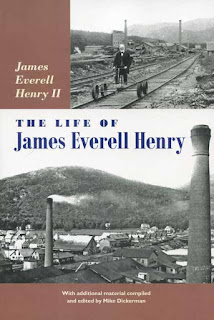 Because I live on the Vermont side of the Connecticut River, I focus more on the history of the Green Mountain State. But when we're talking about the decades of timber harvesting, both sides of the river have complex and fascinating stories to tell.

For the Vermont side, the books by Waterford native Robert E. Pike, Tall Trees, Tough Men and Spiked Boots, narrate the winter lives spent in the northern forests, followed by the perilous spring adventures of bringing the logs down the swollen rivers. River log transport ended on the Connecticut as Waterford watched construction of the Comerford Dam in 1930. It can still be witnessed on occasion in Maine, but the risks outweigh the benefits and need most of the time.

On the New Hampshire side, J. E. (James Everell) Henry undertook construction of railroads that penetrated deep into the forested landscape. Not only did his timing mesh with the willingness to spread out the rail network, but it also coincided with the use of shorter logs that could fit onto rail cars.

Littleton, NH, author Mike Dickerman compiles material on Henry, along with a vast knowledge of the high peaks of northern New Hampshire. In August 2014, he visited the Waterford Historical Society to talk about Henry and his own book on this ambitious and accomplished leader.

Today, as Dickerman prepares a new book on history of the high peaks, he shared a photo of the Waterford woman who would marry J. E. Henry: Eliza Ann Ide (daughter of Joseph and Almira), who was 20 years old when this photo was taken. Her marriage would follow two years later.

Since the photo was taken in 1852, it's a perfect mesh with the historical fiction series I'm writing, Winds of Freedom. I can absorb from this image of Eliza's face a reminder of both the lack of experience and the determination to enfold life that so many of our New England young women combined at age 20 in the nineteenth century. It reminds me, too, of my own early adult years, the mistakes and successes, the surprises, the constant learning, from kitchen to garden to babies to how a marriage works and how to sustain love over the long term. (That takes a lot of learning!)

Mike Dickerman also shared this photo of Eliza (Ide) Henry taken 60 years later, in 1912 -- I think she looks younger than her 80 years in the photo, and clearly she's still industrious and creative.

It seems to me that in this pandemic year, as we shelter in place while waiting for medical science to develop the vaccines we so desperately need, we mustn't overlook that we are also "aging in place." Such a close relationship with place is a traditional resource and value of this northern area, where family roots may go back a century and more, and even newcomers begin to bond with the terrain, the light, the plants and animals, as they struggle through their early seasons here. It's been a joke to "city folks" that we in rural areas talk about the weather so much ... but it defines each day's opportunities and necessities. So we have to pay attention.

Living beyond the years of a beloved spouse or child also change our relationship with time, in my observation. Instead of the calendar being significant for upcoming milestones, it has more to say about counting from major events: I am in my second year after my husband Dave's death. Through the long powerful rope of love and "missingness," I am tethered to what has been an anchor for me.

In the 1912 photo, Eliza had been a widow for only days or months. I wonder how she saw her past, and how she looked ahead. She would live nearly 20 years longer, dying at age 99 in Pasadena, California, so at some point she clearly decided to stir up excitement in her golden years, and travel across the nation (by rail, I trust!).

That's a good reminder for today: We are sheltering in place, and aging in place -- but the years ahead will include freedom from the pandemic, and amazing adventures, if we choose.

I have a lot of reasons to watch for information about Speedwell Farms. This agricultural effort of Theodore Newton Vail, whose telegraph-related enterprise skills empowered AT&T in the early 20th century, was a model of modern agriculture for its times. Through a series of local connections, T. N. Vail, a quintessential "out-of-stater," bought farmland in Lyndonville, Vermont, and developed it in both size and farming methods.

Following the highest moral code of his time, Vail contributed heavily to his Vermont town, and both Lyndon Institute and Lyndon State College, now NVU Lyndon, owe their strengths to his support.

Vail's life and philanthropy were the major collecting interest for my husband Dave Kanell, enlivening his retirement years with an endless quest for related materials. Last week I noticed what's called a "real photo postcard" set at Vail's Speedwell Farms, and being sold online. The price was higher than Dave would ever, ever have paid, so with great regret, I didn't purchase the original, but the two photos here show the front and back of the card.

I have another connection to this beyond Dave's passion for it: Speedwell Farms took its name from the New Jersey ironworks that the Vail family established in the previous century, in Morristown there -- a place I often visited as a child with my mother, who loved its historic houses and battlefield. Talk about nostalgia!

Finally, this postcard was mailed to Miss Margaret (spelled Margrett) Bean in "Watterford Vermont" -- that is, my own town of Waterford. It's postmarked in both Lyndonville and Waterford -- on June 30, 1908, at 8 pm, in Lyndonville, and then the next morning (July 1) in Waterford. I transcribe the writing as follows:

[If you see it differently and have a reason to think you know the sender, let me know!]

In documents archived online, I can find  Miss Margaret Bean teaching in Waterford in 1925. She was quite young when this card was sent, though, only six years old at the time! Her parents were Ervin Lester Bean (a farmer; 1873-1957) and Orpha P. Kerwin Bean (1879-1929), both born just across the state line in New Hampshire. Margaret married Warren Weston Whitney in 1925, and lived in Littleton and then Lancaster, NH, where her burial stone stands.

Since one of my 5-great grandfathers is Jonathan Bean of Candia, NH, I'm especially curious about Margaret and may pursue this again later!

Most important for me today, though, is the pleasure of finding a Speedwell Farms image, and enjoying the link between Lyndonville and Waterford residents in 1908.

Posted by Beth Kanell at 3:01 PM No comments: