Hunting for Images of Vermont's History

It's postcard season. Actually, for my husband Dave, it was always historic postcard season, since he bought many of them online. But this is also the time of year we always made road trips to small, promising shops. So today I packed his love in the car with me, and went to explore an antique shop that mentioned postcards: 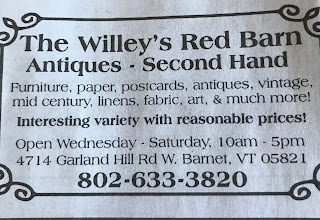 With a time limit (for me, a good way to shop) enforced by an alarm on my phone, I dipped into the Vermont postcard and found three that I think will inform my next novel. From least to most amazing, here we go ... First, here's an interior shot of a granite shed, one of those workshops where stonecutters turned Vermont's foundation rock into monuments of all sorts. No guarantee which shed it's from, but I like the busy-ness and the fact that there are SO MANY men working here. No wasted space! (Wouldn't want to be in there on a hot humid summer day.) Note that they are also all wearing their hats and caps. Food for thought. 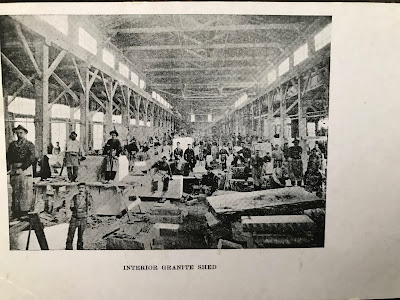 Second, this shows "cream" being received at the Lamoille Valley Co-operative Creamery. I was surprised at the notion that the cream might be separated before transporting the milk cans from the farm! If you know more about when farmers would have separated their cream before filling the milk cans, please do let me know. Note the horse-drawn wagon and the ribbed umbrella being used by the lady in the seat. Also the workers' hats. The back of the card says in pencil "Where we sold cream the first ten years of farming in Walden." 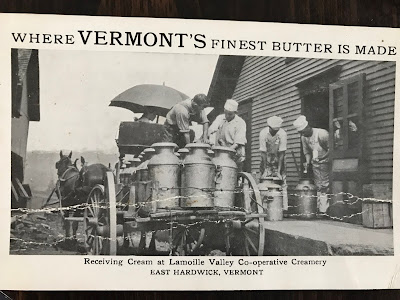 Now the grand finale -- especially significant because it has a penciled identification on the back, not quite the same "hand" as the other postcard but still a hopeful sign that this card too might have come from Walden. It says "Dell Babcock," and I was thrilled to locate the death certificate for Della Babcock of Walden (1859-1939), so I'm pretty confident this is a match. Note that her father was a Bailey, and her mother came from England! The conveyance she's driving -- can you name it? -- will appear most surely in book 3 of my Winds of Freedom historic novels series. 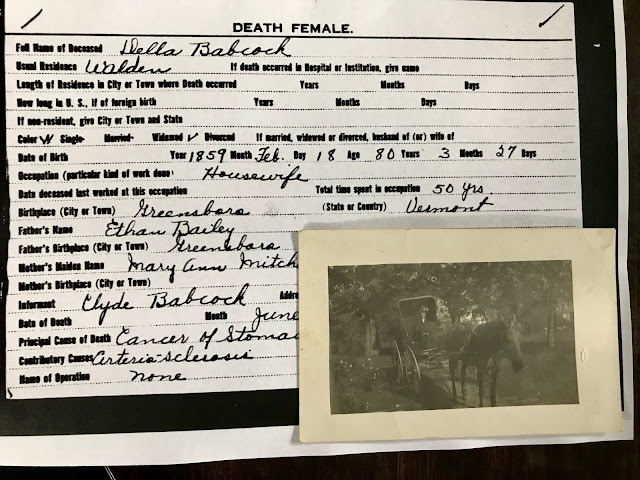 And that's how research becomes an amazing adventure, on a warm July day in Vermont.
Posted by Beth Kanell at 2:01 PM