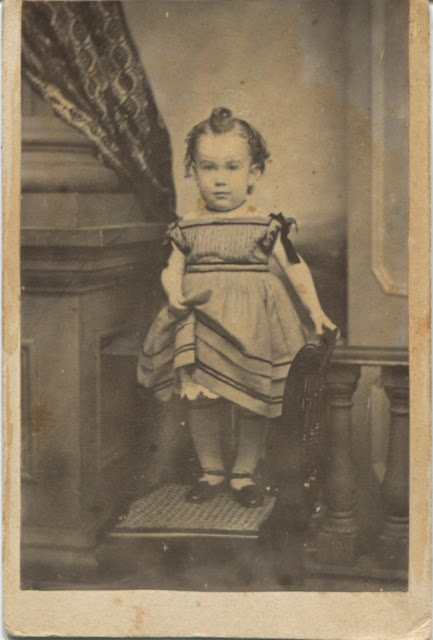 Although it's barely a whistlestop* now, with just a post office and a church and a "free library" on the post office porch -- plus the significant Peter and Polly Park, which I'll write about at another time -- East St Johnsbury was once a hub of manufacture and business. The significant Fairbanks family that nurtured both jobs and culture for the area erected its first mill on the Moose River in East St Johnsbury. Actually in the early days this was "St Johnsbury East" or just "East Village." And it prospered.

That prosperity and the related emphasis on education were in the background of a youth named Franklin Benjamin Gage, born in the village in 1824. He became a significant inventor in photo processes, and created both portraits and landscape images. I'm enamored of his stereo views of the region, which have become hard to find.

Shown here is a child portrait -- could it be your great-great-great-grandparent? -- probably made in Gage's studio in St. Johnsbury proper. On the reverse, he calls it an "ebonytype": a fancy name for a way of presenting the work that may have emphasized the sharp contrast of black and white in the original portrait. It's hard to tell now ... "ebonytype" doesn't have a definition that I've found, and is only mentioned in a wonderful article on Gage, from which I draw this quote: 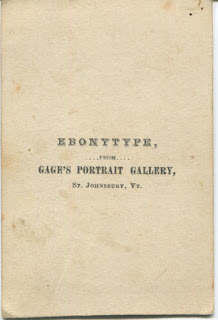 By 1856 Gage advertised that his was the largest photographic establishment in the state of Vermont; at first offering daguerreotypes and then adding all the modern processes and styles as they became available – ambrotypes, mezzotypes, ebonytypes, cartes-de-visite, cabinet portraits, and so on, as well as displaying and selling his stereo views.

The highly researched piece on Gage is authored by Bill Johnson and Susie Cohen -- I don't know who they were/are, and they stopped posting their writing about vintage photos five years ago. But I keep returning to the article, and now it has added meaning because the prime of F. B. Gage's life overlaps the period that's coming to life in my in-progress book, THIS ARDENT FLAME (second in the Winds of Freedom series from Five Star/Cengage). So I am thinking about what Gage may have seen in this image, and why he chose it to promote his work.

If this IS your four-greats grandparent, please do let me know. I'd love to attach a name to the face.

*Whistlestop: a railroad term. Also pertinent to the article I spent yesterday researching and drafting. You'll see it soon.