A few weeks ago, Dave and I took a drive to Gilman, Vermont, a village of many names -- it's a village within the town of Lunenburg and was earlier named Fitzdale, but adopted the surname of the industrialist and philanthropist who changed its history: Isaac "Ike" Gilman. The lone Jew in town, Ike Gilman created employment, funded the church, provided in many ways for enrichment of village life. It's a bigger story than that, but I'm leaving it to Dave to collect the research and do the telling.

Just before reaching Gilman, we paused in another village, East Concord -- part of Concord, Vermont. Concord has an amazingly rich history, including the first teacher training school in the state (a "normal" school as the label was then), and a home where poet Robert Frost lived for a year or two. Home to many an agricultural enterprise, it also hosted Abenaki (Native American) presence, in part due to its location along the Connecticut River and its lakes and streams.

East Concord has a serene white church building; a park; and a state history marker honoring the Rev. George Lansing Fox, one of the famous "Four Chaplains" whose sacrifice made such an impression during World War II. You can read the story here: http://en.wikipedia.org/wiki/Four_Chaplains

On this Memorial Day weekend, we motored over to the Concord Historical Society to see a special exhibit on Fox and the other three chaplains, including many magazine and newspaper articles, a video, and a state proclamation honoring Fox. It seemed a perfect time for the town to reflect on its homegrown hero, a man who never fired a weapon in the war but whose action saved lives. 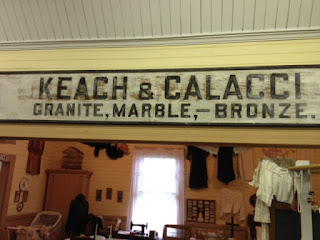 We lingered among the other exhibits, appreciating the town's farm and logging heritage as well as its schools, doctors, and more. What I hadn't realized was the role of stone in Concord, until I saw this lovely old business sign up on the wall for Keach & Calacci -- Granite, Marble, Bronze. In Vermont history, the Italian stonecutters are usually found around Barre, where the Rock of Ages granite quarry continues to provide material for these artists. I knew they had also reached the Northeast Kingdom town of Ryegate, where there were (and still are!) also granite sheds. But I was surprised to find the Calacci family all the way over in Concord, and noted the business in records from 1928, 1930, and 1935 (listed here).

Last but not least, here are two posters that are tacked high over one of the doorways at the Concord Historical Society -- the one on the left is the shows at Tegu's Palace, one of the two St. Johnsbury theaters that I wove into my 1930/Waterford "history-mystery," The Darkness Under the Water. What a gem! And the one on the right, I am guessing, belongs with a street sign that I noticed outside East Concord during our road trip: Dance Hall Road. (It runs into Oregon Road -- more on that, another time.) 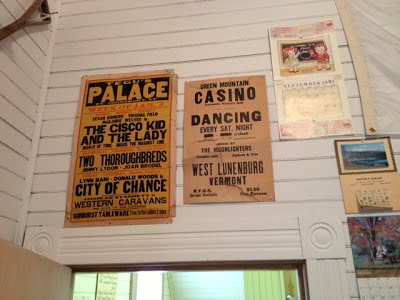 In case it needs saying, what these signs and stories say to me, more clearly than ever, is that hundreds of stories wait to be told, weaving the daily events and places of the past century into the adventures of the people, "real" and fictional, who live and lived in Vermont. I can hardly wait to discover more.
Posted by Beth Kanell at 7:18 PM

Beth, you have an intriguing way of tossing out some historical tidbits and weaving the words together in a way I want to know more! I think there are many stories waiting to be told about Concord, VT. One of the longtime teachers there, Mrs. Gwen Howe, hooked me on her childhood stories from Concord -- local reaction to living around Mr. Frost and his hermit ways -- being embarrassed having to drive the horses to town for her father to get them shoe'd. As long as you keep telling, we'll keep listening! After all, pounding the ages-old pavement is the "hard" part!

Count on it! I'll spend more time in Concord over the next few months. Let's see what stories start to come together.