Touring in the Neighborhood 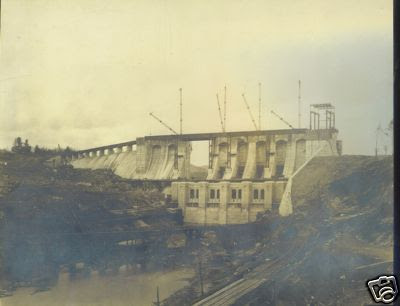 Today's author event was a discussion with the Lyceum Club at St. Johnsbury Academy. We talked about Molly's choices in The Darkness Under the Water, and about how she handled the stresses and situations in her life. An interesting side discussion formed around the effects of tuberculosis on Molly's mother's health, and how that might also have a role in her distance from her daughter as the book begins.

Two bits of regional history came up in particular in today's discussion. One concerns whether Catholics in this area would have dared to enter a Protestant church and attend a service there in 1930, as Katy O'Connor and her family do near the start of the book. Because two of the discussion participants spoke of their experience growing up as French (French Canadian) Catholics in Vermont, we talked about the way Catholics side-stepped going to Protestant services in the 1950s -- going into the social events "downstairs" in the churches, but not into the worship "upstairs." Some were taught by the priests that to attend a Protestant worship service would be a terrible sin.

But Academy historian Rich Beck confirmed earlier this fall, and so did archivist Joanne Bertrand today, that the active presence and malevolence of the Ku Klux Klan in Vermont in the 1930s pushed some Catholics into attending Protestant churches after all, as a way of keeping a low profile. The KKK targeted both people of color and Catholics in Vermont at that time.

The second bit was the presence of Mohawk Indians in the region. One discussion participant explained that her French-Canadian origin family had only recently realized one of its members was a Mohawk. That brought up the role of the Mohawk crew that came south from Montreal in the 1950s for the construction of the second large power dam here, Moore Dam. The steel-work supervisor from that time period recently recalled how he'd contacted the union "hall" in Montreal to get extra help, and how exciting it was to watch the crew: One member kept the fire going at ground level (where he could enjoy seeing who came and went all day), and the others worked many feet above him, as much as two stories higher. The fire-working crew member would heat a large metal rivet at the fire, seize it with tongs, and hurl it up into the air; other crew members, above, caught each rivet with a metal funnel-shaped device, and hammered each into the steel structure. To start your own research on Mohawk steelworkers, click here.

I'm posting a photo here from construction of Comerford Dam -- the one that actually was built in 1930. This was taken while the dam was under construction.
Posted by Beth Kanell at 5:43 PM

Lyceum, a reading group at St. Johnsbury Academy, met yesterday with author Beth Kanell for desert and discussion of The Darkness Under the Water. Lyceum is composed of both student and faculty members. The response from both factions prompted me to share the positive response of this group.
Students comments included, “I loved the book and insisted my Mom read it,” “I am from Tennessee and new to the school and as a reader I enjoy books that share the historical culture of the area, so for me I really enjoyed the book,” “I feel so fortunate to have the author join us for this discussion,” “I enjoyed that you, the author, left pieces of the story to our imagination.”
Faculty comments included, “I read the first half of the book to my students, and then asked them to write down how they thought the story would end, and then they finished the book on their own. I was so impressed with how on target the students were even to guessing the sex of the baby. The students are so taken with the story that they are hosting a lunch next week and have invited Beth to join them.”
“I loved the book. It has been such a joy to discuss the book with the author. I wish that we could have the author with us for all our discussions.” “Growing up French Canadian and Catholic in St. Johsnbury, I experienced many of the same prejudice described in the story. It really connected me to the story with a deeper appreciation of the suffering prejudice can bring.”
During my eight years of hosting the group I would say that The Darkness under the Water comes to the top of our “best reads.” This novel awakens us to the prejudice that surrounds all of us.
As high school librarians we felt the connection the students and faculty had made to Beth’s work. Our students found they could relate, in a proud way, to the neighborhood characters in Beth’s story. This is a superb example of a thought provoking young adult read.
What this book does best is open the door for discussion. As I listened to student and adult readers share their insights, I began to think, that with this engaging story as the jumping off point, curious students with the guidance of a teacher could ask questions, research, and draw their own careful conclusions. This could include questions about historical accuracy, cultural and social knowledge, and reflection upon family and personal experiences. As I listened, I heard that students were careful consumers of what they had read. They were able to discern that this story was a not factual depiction in all its nuances. They were judicious in their interpretation of the literary devices, tone of the work, and historical elements. One concept that fascinated them was the idea that Vermont would have had a formal eugenics project in place in the last century. For these diverse students, who have been steeped in an ethic of community, their level of awareness was raised and their consciousness broadened as they thought upon the consequences of such a program. They connected with the local history surrounding the damming of the Connecticut River. They tuned in to the ethical conflicts, debating what would they have done in Molly’s situation. They regarded Gracia’s voice as part of Molly’s growth and development, until she matured and listened to her own heart. This novel, gives voice and face to a facet of nearly unknown Vermont history, a history that for many of us was built on a story book past, of great heroes like Ethan Allen; this book, begins to wedge open a crack in that cherished vision of Vermont’s impeccable commitment to freedom and unity.
Jean Fournier, Library Director
Joanne Bertrand, Assistant Librarian
Denyse Daly, Circulation Supervisor