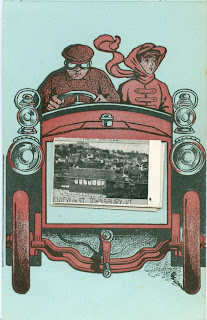 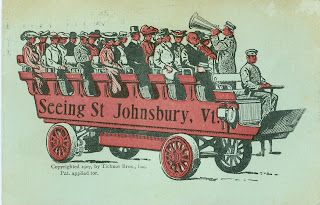 When I visit groups to discuss COLD MIDNIGHT, I often point out the photo of the Chinese man that nearly led me astray when I was working out the plot of the book and its careful pinnings to the history of Chinese arrivals in northern New England in the 1880s. Here's another pair of items, located by my husband Dave, that could be deceptive. They seem to show a touring vehicle, with people on board to look around the town of St. Johnsbury, Vermont. You can see the date 1907 on the card -- the year when the noted postcard company Tichnor Bros. applied for a copyright on the clever pair of images.

However, although St. Johnsbury did indeed have plenty of tourism in 1907, these images doesn't show the "real thing." (The top one, though, has some real photo images attached to it with an accordion fold.) The cards are among many that were created where town names could be set into the card, and orders placed for "anywhere." Often the cards like this are amusing, and some are romantic, but ... they are stock images, made by the card company without ever visiting the town named on them! That also leads to another entertaining side of the cards as we collect them today: On quite a few that we've seen, the town name has been misspelled!

But it's all in fun, and it was a classic of a hundred years ago.

Just don't count on these for "pictures that show the real thing." They show effect of the tourist trade, instead!
Posted by Beth Kanell at 3:52 PM