On Sunday morning at 7 a.m. on WIKE-AM radio in Newport, Vermont (1340 AM), Scott Wheeler provides an intriguing conversation each week that delves into this region's culture -- that is, into Northeast Kingdom life, past and present. Today Scott and I savored a conversation about old photo postcard images of Newport and Derby and how they can instigate new work in historical fiction. At least, for Scott and me, they always set the imagination rolling, along with a hunger for more research and more details. Here is the actual radio show: http://www.northlandjournal.com/audio/bethKanell.mp3

One of the images we talked about is this one from the 1880s of the Memphremagog House, a tourist hotel that could shelter about 400 people! Built in 1838, it was a response to the unusual pattern of New England tourism in the 1800s: People would pack their trunks full of necessities and literally leave the city for six months, to enjoy "country air" and escape the fumes of urban life. You can see how close the train tracks ran to the hotel -- passengers could step down from their rail car and stroll up the path to the front door. Scott pointed out that this was one of several hotels at the time; today's regeneration of Newport's downtown has a lot to live up to!

When I'm writing historical fiction, I'm usually working from more than just a place like this hotel, though, and the historical tidbit that I shared with Scott today (it's hard to find one he doesn't know, but I did!) was about Governor George Prouty, a Newport resident. In 1909, the governor's chauffeur took a "joy ride" in the governor's car, crashing into a parade on the west side of the state (part of the 300-year celebration of explorer Samuel de Champlain) and killing a child in the process. The governor made the national news (the New York Times) when he came forward to stand for the $5,000 bail called for, for the chauffeur's manslaughter charge. 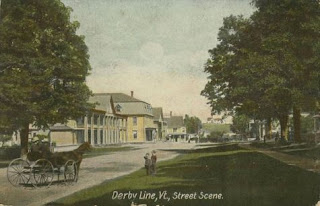 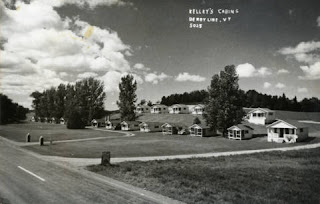 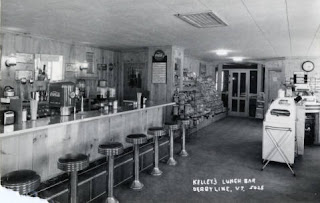 Scott and I also talked about these three Derby Line postcards -- partly for the amount of detail each one captures. In addition, I mentioned that I hope local residents will collect these images before the Internet sells them all to collectors in other places. These are evidence of what life was like, and we need them, in order to hold onto the treasures of our past. They're not just for historical fiction research; they are also for our sense of place, pride, and integrity. Plus, they take up a lot less room than collecting books! (That's a warmly meant family jest, considering how many bookshelves we've filled over the years.)

Other topics: a mention of a Troy resident, Amasa Tracy (1829-1908), the 2004 Phish concert in Coventry that many recall (Scott covered it; he publishes The Northland Journal), and some details of my most recent book, Cold Midnight. Hope you'll tune in for the radio show and catch all of the conversation! Thank you, Scott, for a marvelous half hour.

PS: The two Kelly's postcards are in the Middlebury College collection, which can be searched by town name online: http://middarchive.middlebury.edu/cdm/search/collection/vtpostcards
Posted by Beth Kanell at 6:36 PM