From COLD MIDNIGHT, to American Anti-Chinese Expressions in the Late 1800s and Early 1900s

St. Johnsbury, Vermont, had an unsolved murder in 1921 -- of a Chinese laundry owner named Sam Wah. Because the murder is at the center of my new YA mystery, COLD MIDNIGHT, I talk a lot at author events about the "historically real" murder and the way the local newspaper handled it at that time, as well as in later retrospectives.

One aspect raised a good question from a careful listener at Boxcar & Caboose, the town's welcoming bookshop.

"If Sam Wah was only hosting an 'endless' poker game for the local businessmen, why did the newspaper say he had a 'gambling den' instead?"

The sad answer is the anti-Chinese racism that thrived in America at that time.

Think back to the great era of building railroads across the nation -- most of them were done by the time of the Civil War. After the war was over, many Chinese men who had been kidnapped from their homeland to labor on the rails were suddenly out of work, and willing to take very low wages for other jobs. In the sluggish economic period that followed the war, this became an issue that we today recognize still: "Those Chinese are taking our jobs. Get rid of them! They're criminals and not like us, and besides, they are dirty!"

Those phrases come up in almost any form of racism or anti-group expression. In the late 1800s they led to federal legislation barring further Chinese entry into the country (except for "professionals" -- which included laundrymen!), forbidding Chinese women to arrive ("they would multiply like rabbits"), and saying Chinese could not become naturalized American citizens. The 1882 law actually broadened over the years, being used against all "Asians," until World War I sharply increased the need for males to go to war. Even without the law's force, though, the racism survived.

At that time, the term "Chinaman" was derogatory -- much like "Nigger." Cartoons created a persona of the ignorant, lazy, dirty, immoral Chinese, calling this figure "John Chinaman." Here's a short related piece particularly for educators (including relationships to state standards) that accompanies this image of "John Chinaman": 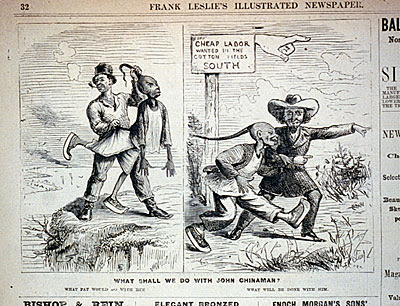 I thank my husband Dave for continued research on this, including the images that follow here: 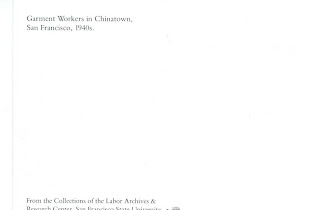 A special note for those who appreciate exploring through music: American song lyrics also showed the feelings against Chinese at the time. See in particular "John Chinaman, My Jo," from Conner's Irish Songbook, 1868. And here is a link to the lyrics for "John Chinaman" and "The Heathen Chinee," from 1855 and 1870, respectively.

Hi Beth - Found you through Twitter. How cool to plot a mystery through an actual historical event. Love the photos!

Hi Beth, just found you through Twitter. How cool to use an actual historical event to build your mystery around! Love the pictures!!

Thanks, Amy - this is what pushes me to keep writing (and rewards me!). I'm glad you discovered the pix and the book!

Your book sounds wonderful and it is commendable that you included accurate background about the strong anti-Chinese feelings then that started decades earlier. Sam Wah, age 59 and single, was the only Chinese to appear in the 1910 census, but no Chinese appeared in the 1920 census (of course, it is not completely accurate). How he came to be in Vermont we may never know, but thanks to your story, we know of his unfortunate fate there.

Census figures do help us, although we can't always track a person's life through them. For instance, at one point Sam Wah had a partner at his laundry, Billy Lee -- but we don't find him in the Census. And you're right, the absence of Mr. Wah in 1920's records is a flaw of the Census, not an absence of the person! It also appears, from the striking number of "Sam Wah" names one can find in U.S. historical records, that even the name may have been an artifact of government: "You're Chinese, we can't (or won't) say what you just said your name is, so we'll call you Sam, a good American name, and you can have Wah for your surname."

In Mr. Wah's case, this was further confused by the discovery after his death that he had used another name in America as well -- which the ravenous press suggested could imply illicit activity, but might just as well have been yet another "assigned" name (ah, Ellis Island and similar border posts!) or perhaps be related to cultural needs to be discrete with one's "real" name.

Without a (Yankee-tradition) journal or letters, it's hard to be sure of the details of a specific person's life. We're fortunate that so many people spoke and wrote of Sam Wah in the weeks following his death, though, so that we have more detail than we might have expected, in newspaper articles of that time.