Chinatowns: From Exclusion to Pride 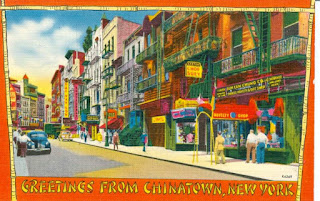 Behind the story of COLD MIDNIGHT, my new Vermont mystery that will release on Nov. 3, are a lot of scattered people and facts, ranging from finding out that high school and college students really do challenge themselves to climb up the outsides of buildings (without getting hurt or caught -- believe me, I would not do this!); learning about an unsolved murder in the neighboring town of St. Johnsbury, Vermont; and having in mind the lack of treatment for "shell shock" for veterans of World War I.

But as the story grew, so did my attention to a terrible piece of U.S. federal legislation from 1882 (and not really disbanded until World War I), the Chinese Exclusion Act. It is in large part because of this act, which prevented Chinese from becoming naturalized U.S. citizens, that Chinatowns became part of American life.

Somewhere in the 20th century, though, Chinatowns became a source of great pride: They are the homes to many Americans who treasure their Chinese heritage and savor the sound of Chinese languages, the scent and flavor of long-familiar recipes, the "at home" feeling of being among people who understand more of your background and who don't make casual assumptions based on the shape of your face or color of your skin.

Chinatowns are also "destinations" now, where tour guides or guidebooks direct eager visitors. And they are places where festivals are celebrated, inviting local news teams and photographers to delight in the activities they can capture on film.

There's much more to be said about Chinatowns, and wonderful books that say some of it -- including the mysteries written by Henry Chang, who sets his books in the New York City Chinatown where he grew up (three available through Soho Crime; the fourth is on its way). I emailed to Henry a copy of the postcard shown here, a festive tourist scene if ever there was one, and here's what he told me:


the postcard is accurate for Mott St. looking toward Pell, circa 1950's maybe. The names of the restaurants and shops are places I remember, growing up. Tai Yat Low restaurant was on the corner of Mott and Pell sts. The bldgs on the left are accurate as some I recognize and the rooflines are pretty much the same today... [He then added] Correction,- Tai Yat Low was on Mott as depicted, and further toward the left, a red sign that looks like a music note, was Lee's Restaurant, on the corner of Mott and Pell sts. Btw I've used the corner bldg on Mott and Pell as a location in Book Four ( the first draft of which I've just finished...)

Also, here's a photo that I snapped in Boston's Chinatown, which I toured in 2010 through the Chinese Historical Society of New England (thank you again!). 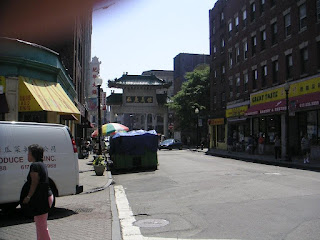 Which Chinatowns have you visited (or lived in)? What did you experience there? When are you going to take part in one again?
Posted by Beth Kanell at 1:13 PM