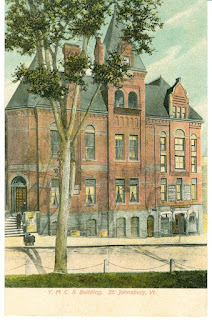 Yesterday my husband Dave and I browsed a postcard "show" -- really a marketplace, with a dozen or so dealers, and hundreds of thousands of postcards, many of them images of buildings, railroads, and people long gone. It was a historian's treasure trove, and we won't be going out to dinner again for quite a while, because we gathered so many of the 3.5 by 5.5 inch cards to bring home with us. I don't think either one of us purchased a modern "color photo" postcard; we chose the early black-and-white ones, mostly camera shots but some hand drawn or etched, and a few hand-tinted with washes of pastel color.

Probably the most compelling in Dave's batch were a pair that showed the disaster of a winter fire that wiped out half the downtown structures of Lyndonville, Vermont, in 1924. Dave will be doing his own posts about that (at the moment, he "does" Lyndonville and I "do" four other neighboring towns). But I want to share the link to a remarkable video we found that narrates the blaze and its results, as well as showing a number of the postcards that were printed at the time to show the disaster. The video is by Lindsay Marcotte, who was a student at today's Lyndon Institute when she made it. Here it is: http://youtu.be/o0JtuL5SK7Y

It's remarkable that Lyndonville looks untouched today (and there have been other fires since then, too).

In Cold Midnight, the novel I'll bring out in November of this year, Claire Benedict climbs the roofs of St. Johnsbury at night; in the first chapter, she sees a fire being "set." Most downtown structure fires in northern New England have been accidental, but St. Johnsbury and Lyndonville (neighboring large towns) have both seen terrible cases of arson. Two imposing buildings that were lost within the last couple of generations were North Hall of St. Johnsbury Academy, and the Y.M.C.A. building on Eastern Avenue. I've put the postcards showing these onto the Cold Midnight Pinterest board, and I'm placing them here, too, for easy access. North Hall (top image, with South Hall more distant) was lost in 1956, and the Y.M.C.A. building in 1984.

A peek into the possible fiction future: I've started another novel called The Fire Curse that works with all those fires. It's not the next one in my queue to complete, but ... I'll get there, one of these days.
Posted by Beth Kanell at 4:07 PM