"Books Over Breakfast," Cameras and All!

The wonderful part of being interviewed on TV at five minutes to seven in the morning is -- there's no time to get nervous! You get up (or I did) at 4 a.m. (a bit challenging for a writer/editor who often is up later than midnight, scribbling or doing research). You drive for almost two hours from the Northeast Kingdom to South Burlington. You take a deep breath and walk into the studio -- and if you're me, you're then fascinated by everything going  on: the sets, the robotically moving cameras, Sharon in her headset working all the scenes together, the real people named Molly and Keagan and Gary who until that moment only existed on your home television screen.

And suddenly you're in the chair on one of the sets, happily saying to Keagan -- who has kindly said "Just look at me, not the cameras, they'll be moving around" -- some of the things about The Secret Room that will always excite and intrigue even the writer, who got to know the characters as they slipped out of their houses onto the autumn scene and opened up secrets in their village.

Three minutes flew past; Keagan generously saved time at the end to share news about the OTHER novel, which is to say, the one that's getting written in public, a chapter every three days or so, All That Glitters (see right-hand column). And then, poof, it was over, and my whole day was ahead of me. (Click HERE for the TV segment!)

So I stopped in Montpelier to take a few photos of some of the buildings that have important roles in the chase and investigation chapters now unfolding. Here they are: (1) the Blanchard Block, home to the very real Bear Pond Books and the fictional apartment of teen detective Felicity "Lucky" Franklin and her family; (2) a building once nicknamed Redstone, I think, that sits across from the State House; (3) a building made of actual "redstone," standing across from the Pavilion Building (once upon a time the Pavilion Hotel); and (4) the State House itself. Now all you need to do is imagine these in an early and fierce winter storm in the week before Thanksgiving. Lucky's feet are freezing, and when she slipped in the dark, her glove landed in ... birdseed. Birdseed? Well, it was under the snow ... a little ways under. More on that, in the next chapter. Click here to catch up on chapter 18. 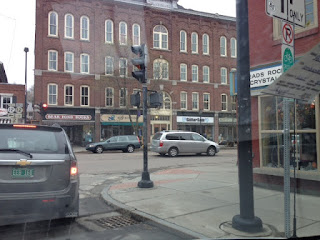 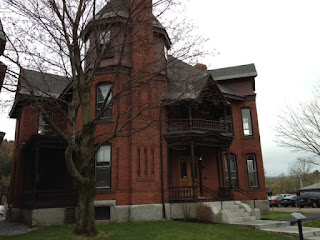 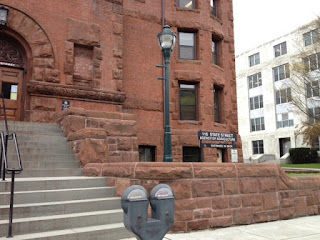 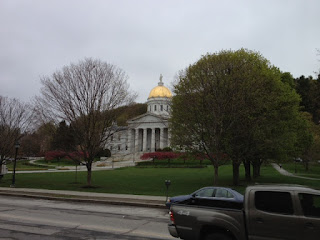